To Read, Enjoy and Perform 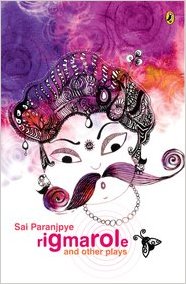 Rigmarole and Other Plays is a collection of three satirical plays that depict contemporary situations, people and events. The genre drama has been used dexterously by Sai Paranjpye to engage with the creativity, imagination and inventiveness of children. The book is a pointer to the fact that dramatic situations abound in the environment around us. A mood, a memory, a situation or a feeling can form the basis of a play. All one needs is to develop an eye for situations and an ear for dialogue. Often, characters and storylines are derived from the lives of the people/animals we interact with on a daily basis. Incorporating observed mannerisms and actions lends a richness and authenticity to the plays and Sai Paranjpye exhibits a keen sense of observation and a fluidity of prose.

Rigmarole is a satire on the adult world and teaches a moral lesson to the young readers without being didactic. Paranjpaye has skillfully used comedy as a vehicle to bring home the reality that in today’s society inane actions of celebrities are considered news-worthy and are showcased on national television. For example, Princess Lizinia is spotted eating vada pav at a stall and ‘. . . it is reported, that in order to get a real feel and taste of the simpler side of the city, the Princess chose to shun protocol, and ventured out as an ordinary citizen. The national polo champion Rajkumar was her unofficial escort. The celebrities were spotted at a vada pav stall, enjoying their simple snack enormously. It is reported, that due to the royal visit, and the ensuing media coverage, the vada pav stall has become an overnight sensation.’

Set in the city of Mumbai, the play’s canvas is all encompassing and the author’s pen lampoons politicians, state-visits, socialites, media, the underworld and even the common man. As she notes in the ‘curtain raiser’ to the book, ‘The play is an upside-down look at a beguiling city in all its splendour and whimsy. It provides a heady mix for those who already know and love Mumbai, and is an exotic introduction for unsuspecting first timers.’ Also, the names that Paranjpaye uses for her characters in this play are apt puns on their personalities e.g. Dhanchumbe as the Finance Minister, Ui Maa as the Women and Child Welfare Minister, etc. On the whole Rigmarole is a gripping story with lots of comedy for children to enjoy.