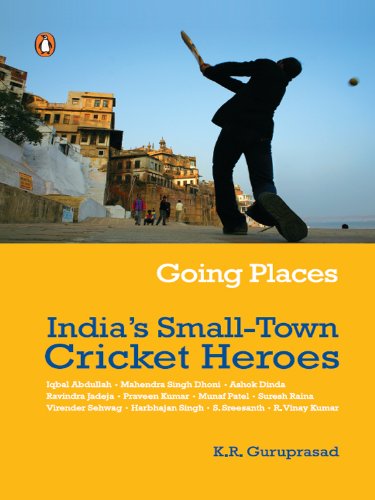 Pick up a travel guide to India. Look for any of the followingKakur Naichanpur Ikhar Davangere Azamgarh. Youd be lucky to find them mentioned in any detail. Even in cricket-centered talk these places dont ring a bell. A whole generation of cricket lovers have wallowed in the fandom of cricketing stars like Sachin Tendulkar from Mumbai Azharuddin from Hyderabad Rahul Dravid and Anil Kumble from Bangalore Sourav Ganguly from Kolkata; giants of the game with one thing in commonthe big cities; hotbeds of cricket where eager colts are a dime a dozen. These cities spawn cricketers who are trained to play the game well develop technique pick up bits and pieces from whatever kind of finishing school big-city cricket has to offer. K.R. Guruprasad in his book Going Places: Indias Small Town Cricket Heroes turns his focus beyond these cricketing bastions to places scarcely five-starred in travel guides. Here in places like Meerut Muradnagar and Jamnagar he finds the stories of the new sons of Indian cricket.

Six of the cricketers chronicled in the book were in Indias World Cup winning squad of 2011M.S. Dhoni Virender Sehwag Harbhajan Singh Suresh Raina S. Sreesanth and Munaf Patel. Praveen Kumar also covered made it to the squad but missed the tournament through injury. The remaining fourRavindra Jadeja Ashok Dinda R. Vinay Kumar and Iqbal Abdullah have all stamped their name in the domestic circuit IPL Under 19s etc and promise much for the future. It is in the stories of these 11 cricketers that Guruprasad has attempted to chart the growth of Indias small towns with the burgeoning phenomenon that is Indian cricket.