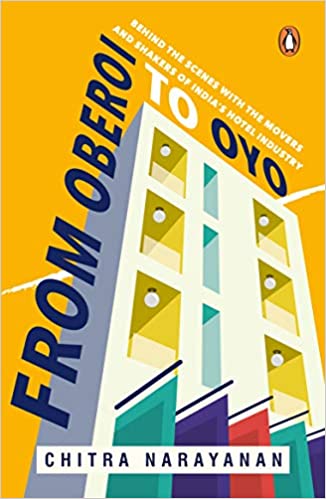 Changing Profiles
Zinnia Ray Chaudhuri
FROM OBEROI TO OYO: BEHIND THE SCENES WITH THE MOVERS AND SHAKERS OF INDIA’S HOTEL INDUSTRY by Chitra Narayanan Penguin Random House, India, 2020, 319 pp., 399.00
September 2020, volume 44, No 9

Most of us still peruse a list of hotels that pop up on various aggregators like we do a menu at an expensive restaurant—with one eye on the prices on the right. We are usually looking for a hotel or a homestay within our budget which will meet our basic requirements of, as Chitra Narayanan puts it, the four Bs—bed, bath, breakfast and broadband.

Narayanan, a Delhi-based journalist, has spent years observing the hotel industry. While the average traveller looks at a hotel through the twin lens of basic amenities and budget, Narayanan looks at the pricing methods, consumer behaviour, history of the brand and the innovations and technology being employed to attract customers. In her book, From Oberoi to OYO: Behind the Scenes with the Movers and Shakers of India’s Hotel Industry, Narayanan not only charts the history of hospitality in India, but also its evolution, while making educated predictions about its future (which, unfortunately, Covid has now rendered precarious).

The story of hotels and hotel chains in India is not purely one of business; there is sentimentality involved. There is nostalgia for the colonial aesthetic and, more importantly, the service and treatment one got during the British Raj era—servers in crisp white and smart turbans ensuring that the tea is poured just so in a tea room where no entry is allowed to those who dare to show up in open-toed sandals. ‘One often visits hotels just to recall the good old days and get charmed by the legends and stories, provided the hotels are smart enough to play them up,’ writes Narayanan. She gives the example of hotels like The Imperial in Delhi, The Savoy in Mussoorie and the Great Eastern in Kolkata—each patronized by some of history’s greatest political and cultural figures. The graceful Imperial is where Jawaharlal Nehru, Mahatma Gandhi, Muhammad Ali Jinnah and Lord Mountbatten met to discuss the Partition; The Great Eastern served as a muse to celebrated Bengali author Sankar for his book Chowringhee; and a mysterious, unsolved murder of an English woman at The Savoy in 1911 inspired Agatha Christie to write her very first novel—The Mysterious Affair at Styles.