Central Bank and the Government: Providing Primacy to an Important Debate 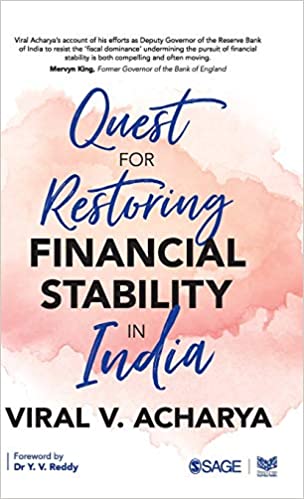 This book intrigues. It comes heavily recommended. It was released, in a high-powered function graced by two former RBI Governors (YV Reddy and Duvvuri Subbarao) as speakers and a galaxy of present and former RBI officials, Deputy Governors and so on. The book carries a blurb by Mervyn King (former Governor, Bank of England) apart from endorsements by Raghuram Rajan, C Rangarajan (both former RBI Governors in addition to being holders of other prestigious positions) and several other financial sector doyens.  In terms of contents, at one level, it is a collection of seventeen speeches/reports targeting a variety of audiences, ranging from the FICCI’s Ladies Organisation, Mumbai chapter, to high level RBI/IBA conferences/summarizing Monetary Policy Committee deliberations. They are thus of various lengths and complexity ranging from ‘light and frothy’ to being intensely academic with pages of equations and derived tables and graphs.

Why would a book consisting mainly of public speeches arouse so much interest? In a feisty and eminently readable foreword, Dr Reddy brings out that the practice of Deputy Governors making public speeches goes back to the days of Dr Rangarajan who was the first Deputy Governor to deliver well prepared speeches containing elements and communications we normally attribute to Central Bankers to create public opinion. He brings out that the most influential was the Kutty Memorial Lecture which had made out a case for ending the system of automatic monetization. The impact was such that it led to a memorandum of understanding between the Government and the RBI, well before it was incorporated as a law. The practice of Deputy Governors delivering prepared speeches was continued by SS Tarapore and all subsequent successors.