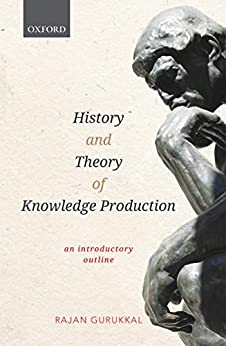 With a partial image of Rodin’s iconic sculpture of The Thinker on the cover, and a dedication to Romila Thapar, the undisputed doyenne of ancient Indian history, Rajan Gurukkal’s History and Theory of Knowledge Production is indeed a formidable feat of scholarship, and it does not belie either its cover or the dedication. The substratum of all knowledge currently in circulation, the germane field of Knowledge Production has been ploughed by very few scholars. Till the 1960s, theories of knowledge figured in general textbooks of philosophy but focused on issues of scepticism, reason and the a priori—appearances and reality, and not so much on the origins and matrix of the knowledge produced. The postmodern turn took the intellectual exercise into an investigation of the fragments and margins, and assessments of the core and overarching themes became passé.

The paucity of scholarship addressing the key concerns of knowledge production—its origins, evolution, systematic formulation and dissemination—is especially glaring in the Indian context. An unfortunate fallout of the periodization of Indian history and its study thereof has been the piecemeal and compartmentalized development of scholarship in the discipline. Most works sit comfortably within temporal niches, and few take on the challenge of grappling with a theme in its entirety over time. Professor Gurukkal deserves to be congratulated in trying to rectify that in this endeavour. Moreover, he brings in a magisterial survey of knowledge production across the world, traces the non-European antecedents in pre-modern Indian, Chinese, and Arab knowledge systems, and contextualizes Greek and Hellenic contributions in the rise of western knowledge.