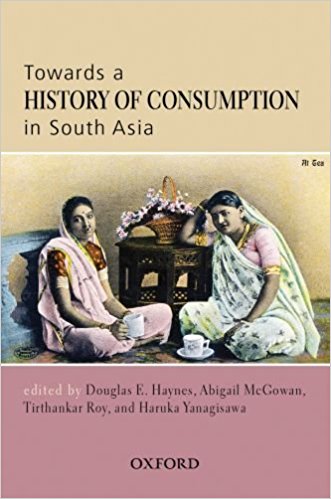 This book ventures into previously nexplored areas of South Asian history, indicating the exciting possibilities of research in social and economic history. Consumption in South Asia begins with the observation that The history of consumption is not an identifiable sub-field among South Asianists, nor are there any individual historians who are known primarily for their contributions to this topic (p. 1). Haynes and McGowan point out in the Introduction that historians of urban industry have concentrated only on aspects related to productioninvestment, entrepreneurship, issues relating to work, labour and organizationand have paid little attention to how these were influenced by changes in consumption. The contributors to this volume had come to recognize the importance of understanding changing patterns of consumption during their own research, especially research relating to craft production.This understanding also helps for a better appreciation of changing identities, new forms of public activity like shopping, the theatre and cinema, and shifts in gender relations (p. 4).

The book begins with an article by H.V. Bowen on the consumption of British manufactured goods in India in the late eighteenth/early nineteenth century. There was a widely held perception in England that the Indian market for British goods was extremely restricted. This was so not only because of the socio-cultural character of Indian society, but was also the result of the ineffectiveness of the trade monopoly of the English East India Company. Bowen argues that contrary to this popular view the market for British goods was growing in India for those which were brought in both by the Company and on private account (legitimately or otherwise). This was partly because of the growing number of Europeans in the colonial port towns, but also because Indians who were exposed to Europeans in these towns were beginning to show a preference for some products brought in from England.

Except for this one venture into early colonial India, the other papers deal primarily with the early decades of the twentieth century. Haruka Yanagisawa starts with an analysis of South India between 1910 and 1950. Based on scattered data on consumption and arguing inferentially he links the growth of small-scale industries in the regionespecially rice mills producing machine polished rice, groundnut mills producing oil, beedi manufacturing units, cotton ginning factories and hosiery millsto changing consumption patterns, especially among the non-elite classes of the local population, who were the main consumers of the increased output of these industriespolished rice, oil, beedis and locally produced cotton yarn which were in turn used in producing hosiery. Yanagisawa ends with a note of caution, that it would be misleading to overemphasize the extent of these changes, because the growth of these industries was certainly limited in scale and did not result in a significant shift in the occupational structure or in the growth of labour-intensive industry in South India.

Remy Diass contribution traces the economic changes that took place in Portuguese India between 1850 and 1950. The Goa region was always deficient in rice production which could meet only one-third of the total demand for rice in the province. The food deficit continued in spite of the steps taken by the government to increase production and productivity, and this, in addition to the heavy land tax imposed by the Portuguese resulted in the emigration of local people to British India from Goa. Remy also argues that the Anglo-Portuguese Treaty of 1878 effectively opened the Portuguese territories to a dramatic increase in imports of many manufactured goods from British India which also led to a decline in local handicrafts. Overall, a major outcome of the treaty was the large-scale migration of people to British India, and their remittances helped sustain consumption levels at home in Goa. As the editors point out in the Introduction, such detailed local studies negate the widely assumed link between migration and pauperization of the rural population. In spite of avoidable confusion in the use of terms like subsistence, yield etc. this heavily empirical study provides a rare glimpse into Portuguese India.

Moving to another corner of the country, Michelle Maskiel traces the changes in the the social life of Phulkaris. The social relations under which Phulkaris were produced and consumed in Punjab moved out of the private space of Punjabi homes where the embroidering of Phulkaris was an intrinsic part of the daily lives of Punjabi women, which were used for clothing or exchange within the family. By the 1950s, both the production and end use of Phulkaris had shifted to the public space and they were being produced as craft products for commercial purposes and used for ornamental purposes rather than for personal use (Can a non-postmodernist ask: do Phulkaris know that they have a social life?)

Central to the study of changing patterns of consumption was the emergence of the middle class. But who constituted this middle class? In Bombay, Prashant Kidambi points out, the middle class essentially comprised upper caste, white collar, salaried employees. The important determinant of their behaviour was their own class consciousness, for they perceived themselves to be a class distinct from the working class, requiring a standard of living and material needs which had to be compatible with their class identity. Equally, at a time of general economic crisis, the management of the domestic economy and household consumption was a matter of great concern. Kidambi elaborates on this with reference to the Kanara Saraswat community in Bombay, though surprisingly he does not relate the issue of careful household management to the traditional values of the virtues of thrift and austerity in personal consumption.

This ambivalence in middle class attitudes to consumption and the expanding economic autonomy of women is captured by McGowan by referring to the cartoons published in the Hindi Punch in the early decades of the twentieth century. The cartoons depicted women (mostly Parsis, indicating the rise of the community as major actors in Bombay society and economy) as being preoccupied with shopping as a social activity, often to the detriment of their housewifely obligations, who showed little wisdom or thrift in their purchases or handling of money. The cartoons were thus a strong expression of the fears of patriarchal society about the subversive potential of women having any economic autonomy or agency. Ironically, at the same time, women were being exhorted to display social and political awareness and support the cause of swadeshi.

The expansion of advertising in India was also a reflection of the growing importance of the middle class as a market for many consumer goods. Douglas Haynes in particular concentrates on advertisements on tonics and health foods and soaps. The language used in the advertisements of tonics and health foods like Horlicks as to their properties which would improve general health and well-being essentially reflected the neurotic fears of the middle class which arose out of colonial conceptions about the effeminacy and physical weakness of the educated, upper caste Indians. But these advertisements also reflected the nationalist discourse which countered the colonial perception and emphasized the importance of building a strong physique. Does the fact that so many advertisements still aggressively promote products like Boost, Horlicks, glucose etc. eulogizing their efficacy in building better physique, reducing tiredness and generating more vitality and energy show that nothing much has changed in middle-class minds in India? Haynes points out that even the advertisements for soaps like Lifebuoy had to change their international line (that the
soap reduced body odour, a fact which seemed to matter little in Indian sensibilities) and shift to promoting the soap for its germicidal properties which would result in better health. The observations made by Harminder Kaur on the use and manufacture of soaps and scents are a close parallel to Haynes’s analysis. While the upper classes in India gradually switched to using European cleaning agents because they were adopting western notions of personal hygiene and cleanliness, Indian sensibilities and tastes were also accommodated by multinational and Indian companies making soaps, who publicized that their soaps were made with vegetable oils and not animal fat which was repugnant to most Indians/Hindus. They also began to use floral and herbal fragrances which were more to the tastes of Indians in their products.

The concluding piece by Tirthankar Roy on craft production reflects his clearly stated stand on the extent of de-industrialization and the conditions of survival of craft production. Artisans and craftsmen had to adapt to many changes during the nineteenth century, not the least of which was the shift to using more cost-effective manufactured inputs from Britain in place of manually produced local inputs. But their survival depended also on their ability to respond to changes in the patterns of consumption and demand of the middle classes during the late nineteenth and early twentieth centuries.

But, Kaushik Bhaumik would argue, the real agent of change was not the middle class as a whole, but the rising class of educated youth in a fast growing urban centre like Bombay. In the 1930s, they were the harbingers of ‘cultural modernity’; the other force for changing value systems was the cinema, which ‘more than any other cultural medium of the time came to be associated with the ways of the young’ (p. 137). The 1930s was the period of great cultural change, when rural youth and women were becoming educated and joining the work force, and what defined this new cultural order was the leisure activities of the young—they ate in restaurants, smoked, drank beer, went to the cinema and read popular novels all of which were expressions of individuality, questioning patriarchal values. While this broad picture strikes a chord, in the absence of some concrete figures and data, the argument is impressionistic rather than convincing. For instance, what percentage of women was getting educated and/or taking up employment in the 1930s, even in Bombay? What percentage of the youth was breaking out of patriarchal family ties in search of cultural modernity? In view of the ideology of womanhood and motherhood and family values celebrated in popular Indian cinema and television fully eighty years after the period that Bhaumik is talking about, it is difficult to accept that public behaviour was a reflection of modernity in the private domain.

In spite of its broad title, many of the articles in this book primarily focus on Bombay, so that the book is much more restricted in its approach than what the title suggests. Ultimately, how representative was Bombay of the rest of South Asia? In addition to pointing the way for future research, this book is enriched by the cartoons and advertisements which are reproduced as illustrations. It is also a book which is fun to read. One cannot say this about too many serious books on history these days.