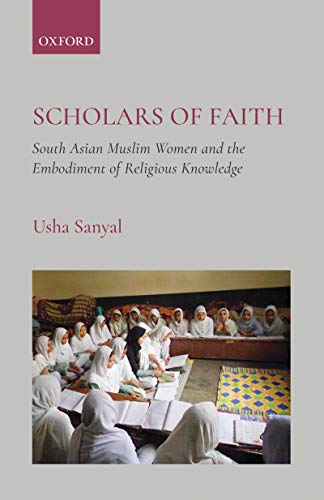 Usha Sanyal’s book on new institutions of Islamic learning for women is an important study on the relatively under-researched theme of South Asian Muslim women’s changing engagement with religious learning. Based on ethnographic fieldwork in two institutions namely, Jamia Nur, a girls’ madrasa in India and Al-Huda International, an NGO that offers online courses on Islam, Sanyal argues that these institutions of Islamic learning for women represent a ‘modern’ South Asian educational phenomenon. Drawing on the concepts of ‘objectification’ and ‘functionalization’ coined by Starett  (1998) she argues that the very idea (underpinning girls’ madrasas and online Islamic classes) of Islam as a religion that can be and ought to be taught as a coherent system is a ‘modern idea’. In fact, according to Sanyal, this is the thread that unites the two otherwise diverse institutions. The purpose of both the girls’ madrasa and the online  Islam classes of Al Huda International is the same—to transform lives and promote a more orthoprax lifestyle among Muslim women by means of textual study of Islam. Sanyal delineates this argument covering a wide canvas of history, anthropology, gender and national and international politics.

The first part of the book, ‘Iman, Ahkam, Adab’ comprises the case study of a Barelwi Sunni madrasa for girls, Jamia Nurin Shahjahanpur in Uttar Pradesh that trains young girls to become religious scholars through its Alima (5-year course) and Fazila (2 year) certificate courses. In ‘Muslim Girls’ Education in North India in the Twentieth Century and Beyond’, Sanyal grounds her discussion on Jamia Nur by tracing the historical development of Muslim women’s education in South Asia from home-schooling to contemporary girls’ madrasas. She highlights the increasing participation of lower class sections of the Muslim population in girls’ madrasas, a trend encapsulated in Jamia Nur which comprises students from rural, working class Muslim families.