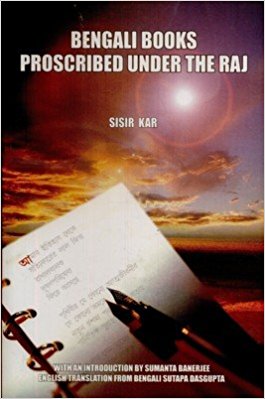 Sisir Kar’s 1988 monograph British Shashoney Bajeyapto Bangla Boi has long been one of the standard reference works on the history of censorship in colonial Bengal. A work of painstaking scholarship it was brought together a wide range of sources pertaining to almost every aspect of print cen-sorship under the British Raj. In over fifteen chapters, Kar first took up the legal aspects of censorship, followed it up with discussions on figures such as Bankimchandra, Rabindranath and Vivekananda, and then went on to consider censorship with respect to specific literary genres. In so doing, he was also able to present valuable and hitherto unpublished material on the history of the Indian freedom struggle. However, the work also suffered from a number of faults: first, haphazard organization of material which made it difficult for a chronological narrative to emerge; second, an excessively partisan tone in places; and third, erratic footnoting and citations. While the last two are minor irritants, the lack of a clear narrative does get in the way of a central thesis emerging.

In the first chapter for instance, titled ‘Reasons for Proscribing Books’, Kar begins by citing a number of unrelated cases of proscription from the first three decades of the 20th century. The cases are dramatic and full of interesting information but then the chapter abruptly breaks off, leaving the reader mystified. From chapter 2 onwards, there is some attempt at a coherent narrative, beginning with a survey of various press-related legislation from the late 18th century onwards. What is valuable about this chapter are the texts of certain key legislations such as the Dramatic Performance Control Act 1876, The Sea Customs Act 1878 and the Indian Press Act 1901. A notable omission is the Press and Registration Act 1867 which made it compulsory for all publishers to register their publications with the government and thus enabled the Raj to keep tabs on everything that was being printed in areas under its jurisdiction.