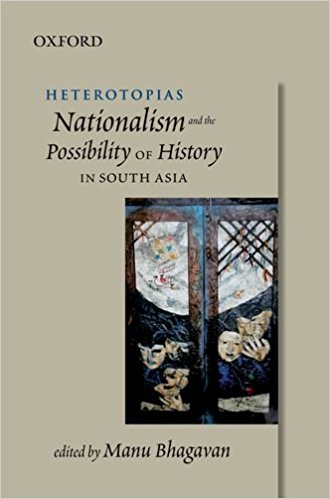 The book edited by Manu Bhagwan brings together seven essays in a series of three interrelated conversations—‘On the Landscapes of the Margins’, ‘On the Dreamscapes of Literary Imaginings’ and ‘On the Heteroscapes of history’—united under the general scheme of what Foucault called heterotopia or the possibility of multiple spaces of experience existing simultaneously and thereby refusing to merge in the dominant and hegemonic imagination of history. The editor makes it explicit in the introduction to the volume that the book was born out of a contemporary concern, the horrific events of Gujarat in 2002. Drawing upon David Scott and Gary Wilder’s work, Manu Bhagwan explains that South Asia had its moments of departure in the late colonial period where spaces were created in the thought of Gandhi, Tagore and Jinnah which allowed the possibility of ‘alternative futures’ radically distinct from liberal nationalism and its attendant structures that have become firmly entrenched now.

However, he further elaborates that alternatives that did not come to fruition at the time of their imagining nonetheless continue to exist in historical consciousness and in our crisis of postcoloniality which exists in a different ‘space of experience’, the ‘horizon of expectations’ stands significantly altered, occasioning for many to revisit these alternatives so as to construct a future imbued with different possibilities and in opposition to past narratives. The first conversation, ‘On the Landscapes of the Margin’,includes two essays, ‘Local Nationalism or Secessionism’ by Yasmin Saikia and ‘Kashmir and Kasmiriyat’ by Chitralekha Zutshi. Saikia examines the growth and decline of the ‘Tai-Ahom’ identity in Assam in a space where the peoples of upper Assam sought to construct a distinct marker for themselves to distinguish their experience both from the homogenizing nationalism of the centre and the Assamese regional identity.