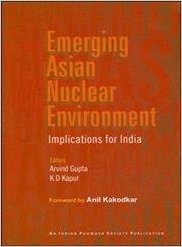 Nuclear weapons are here to stay in spite of the ‘global Zero’ initiative, enthusiastic support given to the ‘zero’ movement by US President Barack Obama, and the ever-increasing amount of international efforts that are under way to disarm nuclear weapons. The likely ‘prolonged existence’ of nuclear weapons in Asia is primarily due to the various inter-state conflicts and balance of power games in the region. It is also due to the perceived energy potential provided by nuclear technology. Moreover, there is yet another important reason nuclear weapons might live longer in the Asian region: Asia is home to many weak powers and weak powers today perceive nuclear weapons as a source of a certain level of security guarantee. In other words, nuclear weapons seem to be catering to the insecurity dilemmas of Asia’s insecure countries, be they Pakistan, India, China, North Korea or Iran. Given the fact that nuclear power could potentially provide major Asian states with energy and security guarantees, there is an equally important need for informed debates and studies on nuclear issues in these countries.