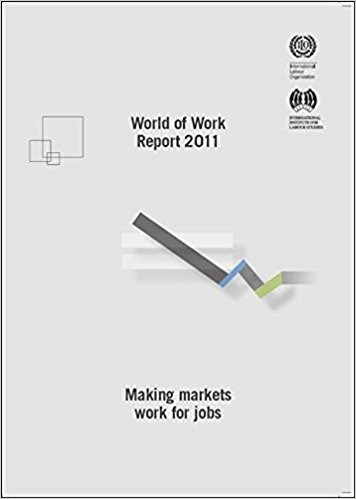 In the backdrop of the economic recession of 2008, this Report is an attempt to analyse alternatives for productive employment. It predicts a double digit recession that would have an inverse impact on jobs, creating social unrest and a delay in economic recovery. The motto of the Report-the way of breaking this vicious cycle-is stated as ‘making markets work for jobs-not the other way round’. In short, the Report emphasizes the instrumental role of markets in creation of employment. The main body of the Report is based on the ways in which this can be achieved. The main shortcoming of such a report is, of course, common to all global studies. This is its global coverage-since the analysis is country-level, the Report does not study distributions within countries. Markets impact different classes and populations in different ways, and a report of this sort only touches upon country-level averages, thus abstracting from reality to a level. However, this is a limitation of this genre of reports, and not of this report specifically. That said, the Report is well organized within its limited framework-divided into five relatively short, easy to grasp chapters, each one consisting of ‘main findings’, a short introduction, followed by the main arguments.

The volume starts with an overview of the financial crisis, covering the deterioration in labour market conditions resulting from market volatility and declining growth expectations. It outlines the need for ‘making markets work for jobs’ which is the theme of the rest of the Report. It leads from there to the outbreak of social unrest in many parts of the world due to rising unemployment-a subsection entitled ‘Employment, rather than growth, is a key determinant of social unrest’ underlines this issue. Without much analysis, this seems to be rather obvious. However, while social unrest is one outcome of declining employment, it is not the only or even the most important outcome. While section C is entitled ‘Recent trends in social well being and unrest’, the focus is on social unrest, while the impacts on well being are not given their due space. One would expect that the first impacts of widespread employment decline, obviously on the living standards and well-being, would be highlighted when the Report is captioned ‘Making markets work for jobs’. The aim of jobs is not merely to prevent social unrest, but more importantly, to create the conditions-decent standards of living-for peace.