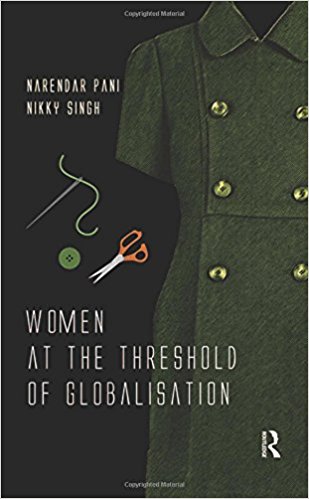 This is a study of women workers in Bangalore’s garment-export industry. It is based on exploratory field study methods, in which much importance is accorded to surveys of the women workers themselves. Along with them, the authors also directed interviews of management and financial staff at different levels of the firms, lawyers who deal with labour cases dealing with the garment industry, representatives of garment-export organizations, representatives of auditors of social and labour standards, and owners of garment firms. Stratified sampling methods have been used, and all in all more than 6000 individuals’ interviews went into the making of this study. More than once in the book, the authors invoke Saskia Sassen’s distinction between the border as a mobile agent embodied in a person, product, or instru-ment, and the border located in different places either within a firm or in transnational domains. They argue that these globally oriented privately owned garment firms when studied in detail allow us to move beyond a command-and-control view of globalization, instead allowing us to see how complex, sophisticated, multi-agential, and legally heterogeneous the practices of globalized export-oriented garment industries are.

The authors highlight in particular the entire set of issues around global labour standards which the buying firms in the West now seek to enforce, including such matters as not employing child workers, hygienic factory facilities, and childcare. The authors deftly show that, firstly, all such talk and practice of standards tackle only very selective issues pertaining to the workplace, and even there, certain ways of configuring or viewing those issues are not acceptable. Thus, while the right of workers to have associations that can negotiate with the owners is enforced, unionization is a no-no. Equally, rights such as permanent work contracts are not demands. In comparison with most of Bangalore’s public sector factories, where housing was sometimes even inside the workplace, in the new globalized workplace there is zero interest in ensuring that the workers should get better housing. The result is that the vast majority of workers lives in inexpensive low-quality rental accommodation, with many of them actually walking to work, since even public transport is considered too expensive by most of them.