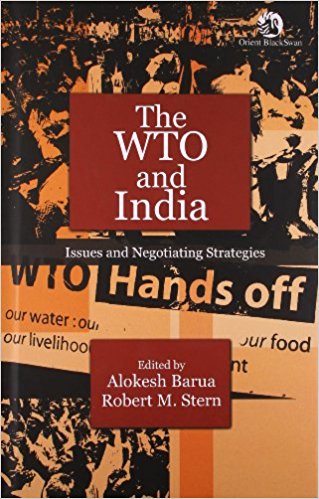 The WTO and India: Issues and Negotiating Strategies edited by Alokesh Barua, Professor of Economics at Jawaharlal Nehru University, New Delhi and Robert Stern, Professor of Economics and Public Policy at the University of Michigan, is a compilation of eighteen papers, partly based on an outreach conference that was held in 2004 in Guwahati, Assam. In addition, the volume includes invited papers from eminent scholars in the area of trade and economics. It gives a com-prehensive coverage of the broad issues that are relevant for India in relation to the World Trade Organization (WTO) and multilateral trade liberalization as well as analyses the negotiating process as a whole. It also attempts to evaluate the actual impact of WTO induced liberalization on the Indian economy.

The timing of the publication of this volume is appropriate, as 2011 marks the tenth anniversary of the Doha Round Negotiations. This is also a time when the negotiations are in a state of stalemate and the future of the WTO itself is under immense scrutiny.At this juncture, a comprehensive discussion of the story thus far would be extremely useful for both policy makers and academicians, especially since India is a leading player that would determine the fate of the Doha Round and other negotiating rounds in future. The volume presents an excellent analytical overview of India’s role in the WTO process over the years and of the WTO induced reforms that have helped India achieve a leading position in the global economy, highlighting the various issues that are most relevant to India’s trade policy in future.