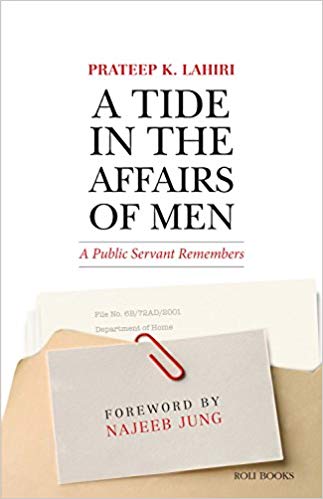 The author was in the MP cadre of the IAS and had a distinguished career both in the central and State governments. This is not an autobiography; it is a well written account of his interesting experiences. In this sense, the author is a chip off the old block. His father BN Lahiri was the first Indian IG of UP police.

The author did not keep any notes and hardly any documents but his recounting of even fifty year-old events has a freshness and immediacy, and the old events are perceptively linked to present-day concerns. Lahiri mentions Noronha, a legendary Chief Secretary of Madhya Pradesh and his excellent book, A Tale Told By An Idiot. Noronha comments that a civil servant often has to deal with ‘Tremendous Trifles’. This is perhaps more applicable to field postings.

Lahiri had an eventful and longish career as a field officer. He handled a serious communal riot as Assistant Collector under training in Jabalpur, pacified angry Sikhs as SDO, Katni, handled student agitation and communal tension as DM, Guna, ran a huge drought and scarcity relief programme when he was Collector, Khandwa and tackled a big communal riot as DM, Indore. The reader gets a real flavour of the tension of those times.

The author has drawn correct lessons from his field experiences in law and order matters. Effective and proportionate early steps avoid a lot of trouble later. The best known example of this is the Babri Masjid imbroglio. When Mulayam Singh was the Chief Minister of UP he foiled a march on the Masjid by taking effective preventive steps. In 1992 these steps were not taken. The Government and the administration adopted a Micawberish attitude that everything will somehow be alright. The rest, as they say, is history. Of course, those who think that the demolition was a good thing will not agree. But I suppose even they will agree that it was a massive failure to maintain law and order.

Noronha’s penchant for colourful language has been mentioned by the author. A snippet from my experience. There was a meeting of all Collectors (hence my presence) of the State. The CM was presiding and the entire Cabinet was present. A minister said something unreasonable to Noronha. His riposte, ‘Main janata ka sewak jaroor hoon lekin kisike baap ka naukar nahin hoon.’ This did wonders for the morale of us civil servants.

It is said that the more things change, the more they remain the same. The Sikhs in Katni were angry in 1963 because they were not given a special sugar quota in time for their gurudwara function. Currently, there is a demand that GST should not be levied on the material used for the langar at the Golden Temple, Amritsar.

The author’s account of the controversy about the construction of the Tehri Dam is interesting and educative. It was a huge project with correspondingly huge relief and rehabilitation effort. However, the main controversy which the author had to handle as Secretary, Mines was the susceptibility of the dam to earthquakes and whether the dam itself would be likely to cause earthquakes. This came within the remit of the Department of Mines because it was the administrative department of the Geological Survey of India. After study by experts it was decided that seismically it was safe to go ahead and complete the project. However, as often happens in government, the controversy kept on rumbling.

Lahiri writes, ‘In recent years there have been earthquakes in the Uttarakhand region, but the Tehri Dam has remained unaffected. In my view, based on inputs from scientists whose judgement I value, the chances of the Tehri Dam being affected by an earthquake are infinitesimally small.’ He continues, ‘An ironical twist was given to this controversy when, during the monsoons in 2013, flood waters devastated much of the habitation in the higher reaches of Uttarakhand right up to the shrine of Kedar Nath, the towns of Rishikesh and Haridwar were saved as a result of the impounding of the swelling waters of Bhagirathi in the Tehri Dam and its regulated release downstream.’

As Revenue Secretary, the author was involved in an unusual cloak and dagger operation. The country was passing through a serious financial crisis, one aspect being that the foreign exchange reserves had hit an all-time low. An unprecedented default in the repayment of our sovereign debt was looming. In this background the lame duck government of Chandrashekhar took the bold decision of mortgaging some of the gold held by it. The RBI had to airlift 47 tonnes of gold to London and 20 tonnes to Zurich on Air-India planes. This had to be done in complete secrecy to avoid adverse publicity. Lahiri was brought into the picture at this stage on a need to know basis because the customs department at the Bombay airport had an important role to play.

The author worked closely with Manmohan Singh, the Finance Minister during the epochal reforms of 1991. His assessment of Singh as FM is entirely positive. His formidable credentials, his hard work as well as personal honesty and frugal habits are mentioned.

The commonly held view is that as PM, Manmohan Singh was not his own man, and the author fully subscribes to this view. He states that this was an example of the Peter Principle where a man rises to the level of his incompetence. Perhaps the matter can be seen from a slightly different angle. The same attributes like pliability which propelled him to power left him unsuited to wielding it.

It is not generally known that after the creation of Bangladesh in 1971 some Indian civilian officers were deputed to that country for some months. Lahiri was one of them. His account of that period is very interesting.

The author has given pen portraits of some other Ministers he worked with. One of these is Sri Gargi Shankar Mishra (GSM), MP from Seoni (MP) who was Minister of State, Mines when Lahiri was Additional. Secretary in that department. His portrait of GSM is very positive.

AK Srivastava is a former IAS officer of the MP cadre.