Can Krishnamurti Be Mainstreamed? 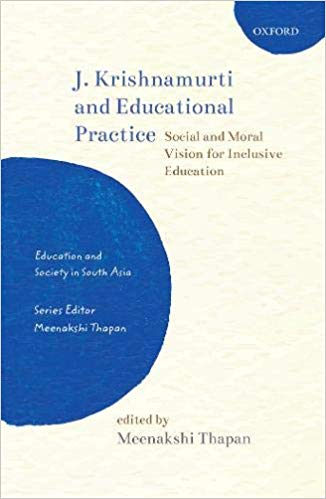 As J. Krishnamurti and Educational Practice: Social and Moral Vision for Inclusive Education edited by Meenakshi Thapan enters circulation, I wondered how to write a non-conventional review of it. That is, to outline the politics in which it can be located and read, rather than say what it contains and what it does not. The bottomline however is, the book consists of thirteen essays on various aspects of Krishnamurti’s thinking and insights as well as a contextualization of the pedagogic practices this thinking has inspired. All the essays are written by a group of authors who are both familiar with Krishnamurti’s thinking and also awed by it.

I consider Krishnamurti a creatively dangerous thinker. He has attempted to engage with constructive ideas, though they were not always popular among political actors and even among ordinary people who might come into contact with them. His thinking is dangerous to conventional thinking and parochial dogmas that often overshadow our ways of looking at the world. Krishnamurti’s thoughts, as articulated in his numerous lectures presented at different times in his peripatetic career, subvert the popular notion of manufactured freedom, formal education, and institutions such as family, marriage and kinship with which we associate most human emotions.

In general, Krishnamurti was interested in fermenting change in the fundamentals of people’s thinking and action. This is why he had such a strong preoccupation with education. Precisely due to this reason, the bulk of the chapters in the book places in context the longer lasting of the experiments inspired by his thinking. This is particularly so in the eight essays presented in the two sections, ‘Leaner-Centered Pedagogy and Practice’ and ‘Diversity and Inclusive Education.’ As Thapan notes, ‘it is in the everyday that Krishnamurti seeks out change, beginning with the individual and the world, both personal and social’(p. 3). Towards the goal of achieving such fundamental changes in thinking, though Krishnamurti focused on educational practice, he did not see education in a reductionist, utilitarian and objectivist sense as it is often understood today. This contemporary reductionism in understanding education has happened mostly due to perceiving it from market perspectives. For Krishnamurti however, education ‘was a deeply nuanced method for the transformation of consciousness and social change’ as Thapan reminds us (p. 4). But education for emotional and intellectual empowerment in this sense is a source of radical political and social power that allows the mind and intelligence relative freedom to roam, discover, creatively conspire and enact change. That is why Krishnamurti saw intelligence as ‘the capacity to perceive the essential, the what is.’ And he saw education as the means ‘to awaken this capacity, in oneself and in others.’