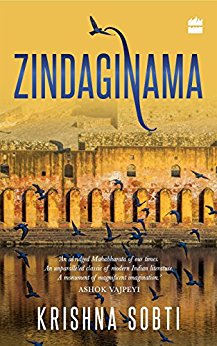 ‘Not by pen, nor by author, nor indeed by technique, but life by its own motion went on spreading, page after page, on paper, as if there had sprung up a mighty living tree on earth’, says Krishna Sobti about her novel, Zindagi Nama Ek ­Zinda Rookh. It is nothing short of a tour de force, a fascinating kaleidoscope of the life and times of pre-partition Punjab. Here are village folk in their own environment; of the earth, earthy; and simple, it also shrewd, in their own way. These are men and women full of life, the people who guarded the frontiers of India and bore the onslaught of succe­eding invaders and yet nothing daunted, continued the even tenor of their life, growing crops, milking cows, raising children. The novel begins with the open of the 20th century and depicts the life of the Indian peasant in the Punjab of those days. They are tillers of the soil and should be the true owners of the land and yet, it is the feudal landlord who reaps the benefit of their toil.