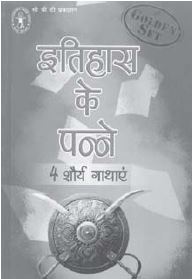 This is part of the Golden Set published by the Children’s Book Trust. A collection of four tales, it highlights four different chapters not often spoken about in detail in history books. Of three queens and a brave lad, separated by centuries, these tales are told in a way that children can learn history through stories. The everyday concerns of the protagonists make the telling natural and easily imaginable unlike when history is presented as something from the hoary past.

However, the collection is a mixed bag. There is no editorial note to explain the reason for the selection of only these and not other chapters from history. Again, there is no contents page or notes on the contributors which is a little difficult to explain.

Of the four chapters, the first and the last are written by Kamala Sharma Shyamala who is to be congratulated on making history come alive. Her choice of subjects to highlight shows that even within the patriarchal system prevalent in India till today, it was possible for women to hold positions of power and rule kingdoms as did Ahayla Bai Holkar and Rani Durgawati. Ahalya Bai Holkar made her mark in eighteenth century Malwa as an able administrator and an ethical and compassionate ruler. How the kingdom of Holkar was established with Indore as its capital, while the Mughal empire was in the throes of chaos and rebellion, with disparate groups vying with one another to grab as much territory and power as possible while the East India Company was spreading its base all over the country is explained. The trajectory of the life of the little girl born in the Shinde family in Aurangabad district in Maharashtra who grew up to be the ruler of the Holkar kingdom on the untimely death of her husband and son, and the history of the region from 1725 onwards till her death in 1795 is a gripping read.