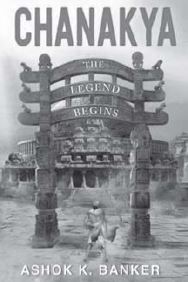 ‘Our greatest weapon is here. The mind. The flesh is weak; . . . But with the power of the mind, one can subjugate other

people . . . Empires are built not only with brute force, though that is essential but with brute will.’ These are the poignant words uttered by Mahaamatya Kartikeya to the seven-year old Vishnu Gupta. While the Mahaamatya’s words are unassailable, the very premise of making such statements to a seven-year old appears a little disconcerting.

Here’s where Ashok K Banker’s story takes off. Chanakya as a name is definitely not an unfamiliar one in Indian story telling. While a lot is known about the king-maker, the author of the Arthashastra, little is known about his early years. Banker revels in this space and fleshes out the mythology of Chanakya’s formative years. The title The Legend Begins works perfectly in this regard.

The narrative begins in the rustic setting of the village of Chanak. The young Vishnu Gupta is immediately established as a prodigy, the eccentric genius with a photographic memory who can beat his teachers in a debate. His family is in awe of his prowess. At the age of seven, Vishnu Gupta alias Chanakya has reached the zenith in his village. Hence, the trajectory of the story pushing Chanakya into the capital, the hot seat of the Magadha kingdom seems almost predictable.

However, Banker’s description of the centre, the powerhouse of the Magadha empire, Pataliputra is directly in contrast with that of the rustic Chanak. Village—city, poor—rich, good—evil, white—black. It is rather unfortunate when histories and legends get reduced to such mutually-exclusive binaries. Banker continues along this structure simultaneously building the characters of the Maha-amatya and Vishnu Gupta on opposite ends of the spectrum. While the former is desirous of power, the latter is in the quest of wisdom beyond his scriptural knowledge. Banker’s narration pits the need for domination against wisdom, reducing the scope for both.

The Mahaamatya appears to be a far more complex and rounded character than the hero of the story. The ‘Rakshasa’ is far more relatable as a person, carrying on the intrigue more than the character Vishnu ever does in the course of the novel. The description of Vishnu is third in line following the glorious descriptions of the place and that of Kartikeya. It could also be an attempt at following the David and Goliath archetype. Banker has made it almost impossible to look at Vishnu without the larger background of the Rakshasa.

Moving past the binaries, the plot definitely lacks in length. It makes one wonder if the trilogy will be a bit of a stretch. The story so far is also definitely masculine in tone. Politics, learning and scripture are entrenched in the male sphere. Even the empress of the kingdom is simply a recipient of the amorous moods of the king, at his choice, or spends her time smiling fondly at her progeny. Banker also cautiously sets the tone for the fall of the Nanda dynasty. No one should possibly question Chanakya’s motives by the time Chandra Gupta Maurya ascends the throne. It also makes one wonder who the mysterious Chandra is.

At the end of the day, Banker has written for an audience who, in all likelihood, would want a scintillating story where the hero reigns over the villain. Keeping in mind that audience, Banker has compensated for the lack of depth by a compelling narrative which makes one look forward to the next book in the series.