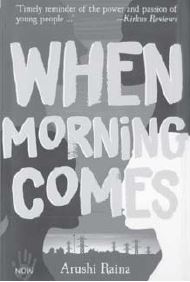 Dystopian fiction begins quite simply with restrictions. A character is not allowed to do something because that would mean defying society, family and the law. Even though Arushi Raina’s When Morning Comes is based on the reality of life in apartheid-era South Africa, it has all the trappings of a good young adult dystopian novel. It has the three Rs of YA dystopia—restrictions, romance and revolt—all wrapped up in an intricate plot that keeps the reader on the edge of their seat.

When Morning Comes is part of a series by Duckbill called ‘Not Our War’. In their own words, ‘The NOW series deals with children growing up in times of conflict—powerless, vulnerable, and yet, against all odds, brave and hopeful of a better future.’ This young adult novel is set in 1976, when the Soweto Uprising, against the South African government, was brutally suppressed. Raina’s novel begins with a historical note explaining the setting of the novel. The Afrikaans Medium Decree was passed in 1974, amending the Bantu Education Act. According to the decree, Black students would be forced to study in both Afrikaans and English after the fifth grade. Students of schools under the Bantu Education Act were not familiar with either of these languages. The preference was for English which was not the language of the oppressors. Students gathered and protested against the imposition. They were brutally killed by policemen. Many of the casualties were children and teenagers. The novel follows a group of teenagers who are inextricably involved in the political life of South Africa.