Beyond the Realist Paradigm 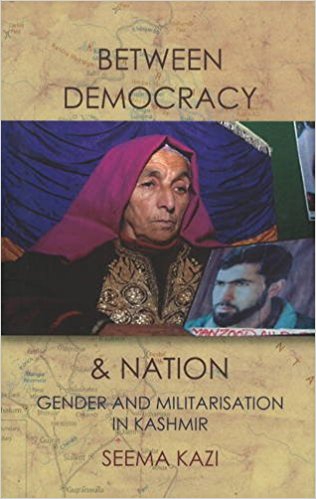 Beyond the Realist Paradigm
Navnita Chadha Behera
BETWEEN DEMOCRACY AND NATION: GENDER AND MILITARISATION IN KASHMIR by Seema Kazi Women Unlimited, 2009, 222 pp., 375
March 2009, volume 33, No 3

Seema Kazi’s book begins on a promising note as she examines the Kashmir conflict from a very different vantage point. Amidst the burgeoning literature on this subject, it stands out as one of the few contributions which are theoretically grounded and make a conscious effort to break away from the state-centric analyses of realist paradigm. Traversing the disciplines of International Relations and Political Theory with insights from Gender Studies, the book engages with varied concepts of militarism and militarization in a very interesting manner. Kazi makes a useful distinction between militarism that is imbued with an externalist orientation and connotes ‘the military dominance over civil authority and/or an undue emphasis of military power in foreign policy’, and militarization, which seeks to analyse the relationship between the state, the military and society within a single (national) historical context.

The understanding of militarization as a ‘multi-dimensional historical process’, she argues, ‘bridges the academic distinction between inter and intra-state military conflicts to place both within a general historical frame that captures the converging crisis of, and within, the militarised state where the military is used for external defence and as an instrument of domestic repression.’ (italics in original).

The clarity in the conceptual arguments is, however, lost in their application to the empirical domain. The second part of this book is marred by fundamental flaws such as conflation of terms and a selective use of data and other scholarly literature to buttress the author’s arguments. Kazi tends to conflate the terms of ‘centralization of state power’ with ‘militarization of state’ and uses them interchangeably in the Indian context. The centralizing imperatives of the Indian state have, no doubt, spurred separatist demands from various ethnic groups but this does not necessarily imply that ‘the authority of the Indian state has increasingly rested on the non-elected institutions’ and, that it has been negotiating ‘political challenges through military means’ (p. 45). The latter argument rests on rather thin grounds. The book refers to the increasing instances of military’s ‘aid-to-civil’ operations as amounting to ‘virtual military rule’ and denial of citizens’ basic rights under the legislative provisions of the Disturbed Areas Act, the Armed Forces Act and the like as ‘not very different from the denial of civil liberties under the martial law’ (p. 70). Both are clearly a gross exaggeration. Kazi cites Stephen Cohen to point out that in 1984, ‘there were approximately 40 million Indians living under the military rule.’ This is a questionable proposition not only because the data used here is more than 20 years old and the author makes no independent efforts to test its veracity but it also goes against the thrust of Cohen’s original argument made in Atul Kohli’s book on India’s Democracy: An Analysis of India’s Changing State-Society Relations. Cohen wrote that ‘India stands as a remarkable exception to the prevalence of military dominance or influence’ in the region and praises the ‘restraint of armed forces [which] allows civilian control, pluralist politics and democratic civil liberties to survive, if not thrive, in India.’ This is quite contrary to Kazi’s argument that regards ‘Indian military as an instrument of domestic repression’ (p. 55).