Beyond A Conventional Reading 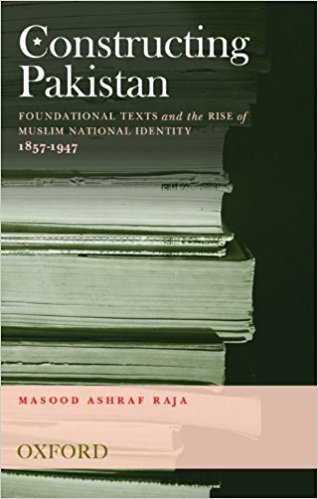 A former military officer in the Pakistani army and now an assistant professor of postcolonial literature at an American university, Masood Ashraf Raja challenges the notion that the Pakistan Resolution passed by the All India Muslim League on 23 March 1940 was the initial point of Muslim/Pakistani nationalism, as the mainstream historiography on both sides of the border and even other cosmopolitan sites have advocated and perpetuated. Instead, Raja proposes that the partition of India and the foundation of Pakistan should be seen as symptomatic of Muslim exceptionalism which, he suggests emphatically, began in the years following the rebellion of 1857. Thus, Raja claims precedence of Muslim nationalism over the general ambience of nationalistic fervour jumpstarted by the foundation of the Indian National Congress in 1885.

Constructing Pakistan, as a book written by a literary critic than a trained historian, seeks to answer the larger question as to how the Muslims of colonial India came to view themselves as a separate nation deserving a separate homeland. The method employed by the author is primarily a reading and re-reading of a set of well-known literary, religious and political texts written by certain key Muslim personalities of the late nineteenth and early twentieth-century. Analysing the post-rebellion narrative Dastaanbuy (A Diary of the Indian Revolt of 1857) of Mirza Ghalib (1797-1869) and its being pro-British in nature, Raja concludes that immediately after the rebellion, the main purpose for the Muslim elite was not to preserve Muslim culture, but to ‘forge a place within the new [British] hegemonic order’ by employing the language of loyalty (pp.3-4). Similarly, Raja’s reading of Asbab-e-Baghawat-e-Hind (The Causes of the Indian Revolt) by Sayyid Ahmad Khan (1817-1898) reflects Sir Sayyid’s attempt to create ‘a space for Muslims within the British administration of India’ (pp.23-24).