Between the Reel and Real 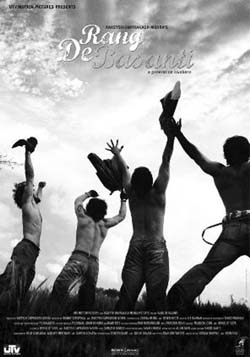 Rang De Basanti (Rakeysh Omprakash Mehra, 2006) is a film that unfolds itself through a narrative-within-a-narrative structure where the India of 1920s is juxtaposed with the India of 2005. The film’s narrative draws strong parallel associations between the Indian freedom fighters of the pre-Independence era and the angered youth of the contemporary times who are upset with the current socio-political conditions in the country and thus, disseminates messages of social awakening amongst the youth. With an ensemble cast of veteran actors like Amir Khan, R. Madhavan, Soha Ali Khan and Sharman Joshi, the film was a box-office superhit

.
After the completion of eight years of the success of Rang De Basanti (hereafter RDB), film-director Rakeysh Omprakash Mehra along with story-and-script writer Kamlesh Pandey and screenplay-cum-dialogue writer Rensil D’Silva endeavours to recapture the RDB effect by providing it a textual dimension in the form of a book that he titles Rang De Basanti: A Generation Awakens—The Shooting Script . Since the film’s narrative centralizes on the death of a pilot, Ajay Rathode (played by R.Madhavan) whose MiG fighter plane crashes while he is on board, Mehra’s book is an ode to the hundreds of airborne warriors who have lost their lives for the country. The book constructs an interesting text by comprehensively integrating both on-screen and off-screen information associated with the film. As the book quotes, RDB was ‘a movie that became a movement’, the film had a strong and impactful afterlife that empowered and inspired the Indian youth in numerous ways. The fact that the shooting script of the film is released as a book after an interval of eight years is a testimony to the success of the blockbuster that RDB was and the socio-political consciousness that it ignited amongst the youth of the country.
The foreword of the book compiles contributions from the film’s director Rakeysh Om Prakash Mehra, Kamlesh Pandey and Rensil D’Silva. It offers a brief but fascinating insight into how Mehra conceived the idea for RDB almost ten years prior to the film’s release, how the initial title of the film ‘The Young Guns of India’ was transformed into ‘Rang De Basanti’ and his association with other crew members including the music director A.R. Rahman and actor Amir Khan. With a prior experience in the advertising industry, both Mehra and D’Silva were novice film-makers who set new rules of film-making with a screenplay that superfluously cuts between the past and the present and thus structures a narrative within a narrative. The foreword gives voice to the angst that Mehra and Pandey shared in a neo-liberal economic nation that was producing aimless youngsters. RDB, therefore, was not just a film but a platform to vent their anger and frustration against the system and a message to awaken and empower the Indian youth.
Structured in between the opening credits and end credits, the shooting script and the storyboard compose the main text of the book and fuel the readers’ visual imagination. With scene descriptions that provide details of locations, characters and dialogues in both Hindi and English, and, storyboard of a few shots that compares the initial sketches with the on-screen shots (in black-and-white), this section offers the readers an insight into how a film translates from a text inscribed on paper to a motion picture on celluloid. Apart from the shooting script and the storyboard, the book also gives a preview into the ‘behind the scenes’ and production stills of the film. A rare collection of the working stills of the cast and crew of the film captured in their most candid moments are worth a glance. This twenty-four pages colour section including on-screen and ‘behind the scenes’ shots provides with a refreshing break from the monochromatic world that the text creates for its readers. A collection of black-and-white production stills also appears at the beginning of the book that collates images that juxtapose the 1920s India with the India in 2005. Images of the actors Amir Khan as both DJ and Chandrashekhar Azad and Soha Ali Khan as Durga Bhabhi and Sonia are examples that draw strong parallels between the revolutionaries of the pre-Independence era and the agitated youth of the post-Independence India and thus, connect the narratives of the past and the present into a linear thread.
The epilogue of the book, namely, ‘Rang De Basanti—Colours of Sacrifice’, briefly discusses the film’s impact on the audiences as the film director Mehra, music-director A.R. Rahman, lyricist Prasoon Joshi and actor Amir Khan share their experiences with the readers. The film struck a strong emotional chord with the audiences and resulted in what the Indian media went on to term the ‘RDB effect’. The impact of the film was such that the restless youth infuriated with the corrupt socio-political situation of the country occupied public spaces for mass protests and their first victory came out in the form of seeking justice in the much controversial Jessica Lal murder case. The last section, ‘The RDB effect’ quotes instances from various people who were inspired by the film to the extent that they initiated protests against the judicial and political system in the country to seek justice for innocent victims. Therefore, the book reinforces the belief that it set at the beginning that Rang De Basanti was not limited to being a work of cinematic excellence but ‘a movie that became a movement’. The film, as Mehra suggests, assumed its own character where real life began to emulate reel life. Mehra’s Rang De Basanti, A Generation Awakens—The Shooting Script is no doubt a text that offers a sneak-peak into the on-screen and off-screen world of the film Rang De Basanti, quotes interesting anecdotes from the cast and crew and also offers an understanding of cinema that travels beyond the cinematic illusion of the screen and pervades the real.

Ritika Pant is a student at the Department of Cinematic Studies, Jawaharlal Nehru University, New Delhi.