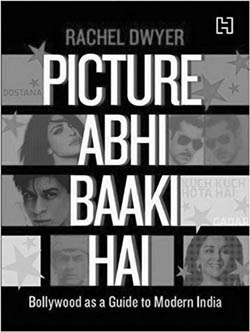 Rachel Dwyer’s Picture Abhi Baaki Hai is a de-tailed account of the films produced in India from 1991 to 2001 and the nuanced ways in which the imagination of India and its ‘New Middle Class’ enters the circuit of Bollywood. Originally published as Bollywood’s India: Hindi Cinema as a Guide to Contemporary India (Reaktion Books, 2014), the title of the Indian edition is an evocative take on one of Shah Rukh Khan’s dialogues in the Hindi film Om Shanti Om (Dir. Farah Khan, 2007) and reminiscent of the title of another Hindi film Mere Dost Picture Abhi Baki Hai (Dir. Rajnish Raj Thakur, 2012). Dwyer takes the onset of economic liberalization and the opening of the markets to international players as a key moment to chart the changes that soon culminated in the consolidation of the new middle classes. Her account taps into the larger picture where the diasporas emerge as crucial stakeholders and a sizeable viewer base for Hindi cinema in the years following the 1990s. Dwyer focuses on how these films drew synergies from the larger discourses on the aspirational mobility of middle classes and their urge to succeed in a space chiselled out by changed configurations and power hierarchies. The book maps out the imagined worlds mobilized in these films and how these reflect the nation’s hopes, anxieties, fears and dreams.

One of the most interesting facets of the book is the deeply personal touch that Dwyer brings into play in a section immediately after the preface titled ‘A Personal Note’, where she nostalgically refers to the time when she watched many of these films on VHS in the early 90s, struggling with limited proficiency of Hindi and her excitement on re-watching the same after years in a ‘clean print’. In stark contrast to the objective and impartial engagement which is prioritized in academic circles to unpack the object of enquiry, Dwyer acknowledges her position as what she calls an ‘acafan’ (academic fan) and even outlines her personal preferences for the analyses of certain kinds of films, as for instance religious dramas over rape/vigilante films (p. 36). Dwyer concedes right at the outset that her endeavour to explore the films is shaped by a ‘loose interpretation of psychoanalysis’ (p. 33) and its attempts to unravel the missing links to read into subtexts and unrealized possibilities. However, it is the reference to extra diegetic factors and how they condition the after-lives of the films that make the book an interesting read.
The first chapter looks at the multiple modalities through which Bollywood defines ‘Indianness’ and how it incorporates various constituencies and imaginations within its fold. A central idea in this chapter is the use of a historical mode in Bollywood cinema, which has been fruitfully experimented with in the recent past. These include films steeped in historical pasts, loose biopics which recreate past moments by improvising life narratives, films which draw story threads from medieval historical accounts and films which use the past as an entry point to introspect on the present failings and misgivings. Dwyer closely examines how the present slips into the historical past in these films which re-invoke moments and historical strands which were relegated in the dominant accounts of the time. Apart from concentrating on films that look at the contested terrains of identification in the aftermath of violence such as Partition, the Kargil war or the Mumbai blasts, this chapter also devotes a section to Shah Rukh Khan and his emergence as a diasporic hero through Karan Johar’s films.
Dwyer explores how diversity is mobilized as a popular trope in Bollywood, amidst linguistic differences and regional specificities that colour the nation in complex ways. Dwyer closely addresses how the cinematic imagination has been mobilized around language, cultural differences and nationalism. Exploring the changed landscape of language use, she also examines how Hinglish—code-mixing and code switching through the porous usage of Hindi and English, manifests in Bollywood films thereby weaving new modes of social and cultural imaginations around class and caste. The chapter also has a substantial section on how regional stereotypes are spawned and replicated leading to hackneyed portrayals, which mostly stand out because of the exaggerated and farfetched references which are rather removed from reality.
The percolation of religion and belief practices into Hindi cinema after the 1990s is analysed. Dwyer pays special attention to the ways in which contestations such as the Ram Janmabhoomi debate which culminated in the demolition of Babri Masjid (1992), coming of Bharatiya Janata Party to power (1998), World Trade Center attacks (2001), Gujarat riots (2002), Taj Hotel attacks (2008) and so on have led to a wave of Islamophobia, which has also found reflection in Bollywood films. Alongside this, the author also points out how conflation of Indian values with Hindu family values which dominated in films featuring India’s diasporic population allowed for a Hindutva imagination to proliferate under the garb of popular culture. While the fourth chapter explores the emotional landscape in Bollywood through tropes used to foreground sorrow, anger and happiness, the fifth chapter looks at the imagination of home through romance, varied shades of love and conjugality and the institutional framing of familial bonds. The sixth chapter takes a look at how consumerism, work culture and leisure get identified through Bollywood as it criss-crosses with the rise of new middle classes. The final chapter looks at the two versions of the Hindi film Agneepath, the first one made in 1990 and the second remade in 2011 to illustrate the changes Hindi cinema underwent in the interregnum.
Some of the generalizations and remarks made by the author come across as a bit too hurried, but still hold the potential to stir productive discussions and debates which is a point that Dwyer ends her Introduction with. Considering the large sweep of time covered in the work, Picture Abhi Baaki Hai leaves out the strand of audience reception completely from its purview, citing methodological difficulties it might involve in addressing dispersed and often fragmented viewing experiences which accompany techno-material changes. But, there could have been interesting insights drawn if the author were to look at the contemporary moment and the retro-mania that accompanies the discussions of these films on social digital media and discussion platforms. Even though Dwyer mentions that her focus is mostly on transnational middle and upper middle class, there is also a need for a more coherent definition of ‘New Middle Classes’ as it is a value-laden term that needs more unpacking. When Dwyer generalizes that ‘Hindi cinema eschews realism…’ (p. 255), one is tempted to counter it by thinking of the various shades of seemingly inane moments in many films referred to in the book which hold the potential to redefine the ‘reality effect’, by puncturing the myth of Bollywood as solely entertainment.