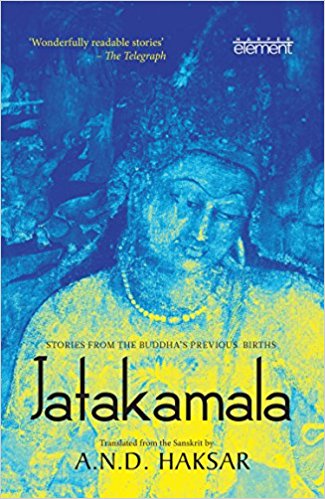 If the original tradition of India is contained in the Vedas, the Vedanta, epics, Puranas and the Kathasaritsagar (“Ocean of Stories”), its Buddhist corpus is the Tripitaka.  In a way, the counterpart of the Kathasaritsagar is the Jatakas consisting of 547 stories of past births of the Buddha as Bodhisatva (‘enlightened being’) in animal and human form. Though compiled in c. 4th century BC, it was given final shape by Buddhaghosha in c. 5th century AD in Pali. At least a century before this (some say in the 1st century AD) a select garland of accounts of 34 past births of the Buddha was composed by the noble (Arya) Shura in Sanskrit in the champu (mixed verse and prose) genre. The literary style resembles that of the Panchatantra and the Hitopadesa. Some of the stories are depicted on the Ajanta frescoes (6th century) while 33 of the 34 episodes are portrayed in the first 135 panels on the upper register of Borobudur’s first gallery balustrade extending all the way from the eastern entrance to the southwest corner that was built between the end of the 7th and the beginning of the 8th century AD.