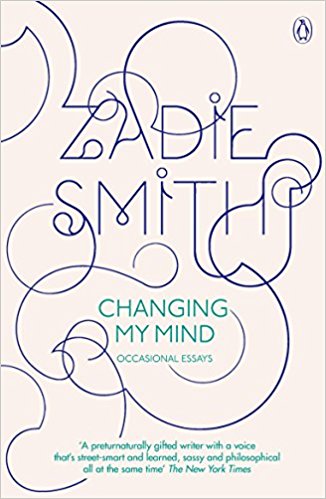 In her essay on ‘The Crafty Feeling’, Zadie Smith describes the craft of writing. It is a love-hate relationship that an author has with her work. A work desultorily begun can become something altogether different once the ‘middle’ stage is reached. The middle stage is when the author can no longer turn away from her own work; she has to keep at it until it is complete.

Whatever the compulsions that drive a writer, Smith insists there are mainly two kinds of them: the macro managers who have an overview of things and then work towards the centre, and the micro planners who are more obsessed with getting the nitty-gritty right.

But the process of writing can also be an educational effort; a writer can see herself change in the process. And then because one has been with the novel for so long, it also engenders a feeling of nausea during the routine and cumbersome process of proofing. Even a complete novel immediately or years after can make the author disgusted with her own work. For the person who wrote it will seem an altogether different person.

Changing my mind is a delightfully contradictory collection of essays, marked by, as Zadie Smith herself points out in her foreword, an ideological inconsistency that is for her an article of faith. Most essays also appear deliberately to take their dictum from a film that starred Katherine Hepburn, The Philadelphia Story, where in the role of Tracy Lord, she mouths the oft-quoted line, ‘The best time to make your mind up about people is never.’

Smith finds herself unable to decide or make up her mind about Their Eyes Were Watching God by Zora Neale Hurston. She is at first confused and even irritated by her mother’s insistence that she read it because she would like it. ‘Why, because she’s black?’ (asks Zadie). ‘No, because it’s really good writing’ (her mother had replied).

After much hesitation, she began reading it and then was unable to let go, even having it on the dinner table by her. Reading through the writing of a black female author at the turn of the last century, Smith realizes that reading cannot really be a colour-blind exercise. Smith had always believed she was a colour-blind reader until she began reading this novel and that cliche of ‘black life’ so evocatively inscribed in the word ‘soulful’ took on new weight and meaning for Smith. As she elaborates, the culturally black meaning adduces several more shades of colour to the word ‘soulful’. And she describes it, even as she acknowledges that there can be nothing less soulful than attempting to define soulfulness. Hurston in her description, in the way she used the word ‘soulful’ makes ‘culture’—that ‘slow and particular’ distinguishing mark of any people—seem as natural and organic and beautiful as the sunrise.

Soulfulness, in Hurston’s work is a sorrowful feeling that is transformed into something beautiful, creative and self-renewing. It also conveys the alchemy of pain. Another shade of being soulful is to follow and sink into a feeling, to go where it takes you and not to go against its grain. Soulful, finally, as Smith argues, is akin to its Jewish word ‘schmaltz’, and both have their roots in the digestive tract. ‘Soul food is simple, flavorsome, hearty, and unfussy with spice.’ Their Eyes Were Watching God is thus a wonderful novel about soulfulness, and Hurston makes black-woman-ness appear a real, tangible quality. Smith realizes after reading that she has understood the novel as only a black reader can.

E.M. Forster takes up the second essay in this collection, in the section called ‘Reading’ as Smith who acknowledged her debt to him in her third novel, ‘On Beauty’ reviews the print edition of his radio talks that he gave for the BBC over a number of years. Forster when introducing books and writers to the public never assumed to talk down to them or appear patronizing, in fact, he was too hesitant, too questioning, and Smith asks in turn whether the listeners wanted that doubt.
In one of his talks Forster mourns the end of innocence and talks of an unconscious distrustfulness—that makes us suspicious of everything. He also never berated nor did he ever criticize contemporary writing and culture, as most literary critics are wont to do, and who at the same time years later, get nostalgic about the past. In his own attitude to writing, Forster believed that one could write about
something only if one got sentimental about it.

This obligation to a reader is something Smith discerns also in the collection of stories by David Foster Wallace that makes up the very last essay in this collection. As Wallace reveals, for him writing was a process where one had to give something of value to the reader. Writing was important and a responsible task. And Wallace made his task as challenging and difficult as possible, because for him fiction ‘was the truest response to the difficulty of staying alive and conscious, day in and day out.’ Writing, as Smith argues, can mean being fully aware, though too much self-awareness can sometimes lead to less responsibility. To Wallace, awareness meant something different, it must move away from the self—the word that he used for this was ‘extrorse’; self-awareness and self-investigation were to be treated with horror.

His stories that Smith reviews show a terrified fear that there may be no emotional connection. This is what the men in Wallace’s collection, Brief Interviews, have in common, something that goes beyond misogyny: ‘they know the words for everything and the meaning of nothing.’

The other two essays that follow in this section consider how different authors and their works have been seen by their peers and other contemporary or later writers. Henry James, the great American novelist and essayist, expresses some irritation at George Eliot’s meandering Middlemarch, with too many ‘central characters’. Smith is critical of James’s way of reading the novel; it is, she says, much like a young man’s with a young man’s certainties, whereas Middlemarch, with its many dimensions of space and character ‘is a novel about the effects of experience that changes with experience.’ The many contradictions that make Kafka make up the other essay. Kafka, and his uniquely individual style of writing came largely to his readers via his biographers Max Brod and later, Louis Begley.

Apart from the essay on writing, the section on ‘Being’ has an essay on speaking in multiple tongues and a week’s visit on war-ravaged Liberia.

The many voices we have in us are natural to us, Smith says in ‘Speaking in Tongues’, and yet there is a dichotomy in how we perceive those who speak in different voices to us. With artists and creative people, it is seen as natural but politicians need to cultivate their voice to touch a chord in people. By extension, she suggests that an individual could be equally happy in her multiple selves as is often inevitable in our globalized, ever-borrowing world, and not be ‘embarrassed’ about the need to fit in.’Seeing’ makes up Smith’s observations on the cinema but the opening essay is a paean to two long-dead stars whom Smith adores in equal measure. Katherine Hepburn, the fiery, opinionated, red-headed dungaree-clad star of such films such as The Philadelphia Story, Spitfire, Sylvia Scarlett, who was also noted for her lifelong romantic dedication to Spencer Tracy. And Greta Garbo, who withdrew into a life of splendid isolation when she was only 36, venturing out only to walk the streets of New York with her walking companions, shunning all publicity and attention alike. Katherine Hepburn, Smith says, never fitted into a role, she made the role her own. She was a feminist at a time when it was unfashionable to be one. And Garbo for her part, struggled hard in her initial years, beginning life as a clothes shop assistant in Sweden. She had mentors who noticed her grace and her ability but she worked on herself, living on spinach for three weeks, till she came to perfect that wispy look and especially the stillness and etherealness in her expression that defines her still.

These essays are so engaging, cover such a wide range of subjects that it is difficult to believe that Smith herself is very young, in her early 30s. Not only for the breadth of her arguments, her ability to weigh several different thoughts and statements together, these essays would make for valuable and even joyful reading for anyone, especially for the aspiring young writer who would learn much from Smith’s sustained, at times irreverent, and curious look at the world around her .