The Minutiae of Immigrant Life 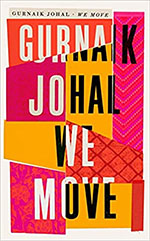 Immigrant life is a complex mix of a search for new opportunity and yearning for a lost home. As older generations grapple with life in a new country and culture, nostalgic for people and places from their past, younger generations in turn strive to become full members of the only country they know, while being raised by parents and grandparents who are often at odds with the new culture. Gurnaik Johal’s debut short story collection We Move provides an endearing and tantalizing glimpse into some of these lives. The stories are set in Southall, a predominantly immigrant neighbourhood in West London, close to Heathrow airport. The airport, with the activity of planes landing and taking off, acts like a silent and invisible character in the book, forming a geographical and metaphorical backdrop to the comings and goings of the many people who live in its flight path.

The opening story of the collection, ‘Arrival’ signals this feeling of movement in unexpected ways. A young couple who live close to Heathrow often allow friends to use their driveway as a free parking spot. But what happens when the person who has left her car in their driveway, promising to return in a week, doesn’t come back? What to do with the unused car, sitting so temptingly and conveniently in the driveway, and what to say to the jilted fiancé who comes in search of his bride? In ‘Flight Path’, a nani (grandmother) struggles to take care of her orphaned grandchild while trying to hide her own grief at losing her daughter. She thinks wistfully of her planned retirement, of a language not learned, of missed opportunities and the twists of fate. In ‘We Move’, the eponymous story at the very end of the book, Lata tries to juggle her mother’s expectations for her while trying to come to terms with the breakdown of both a childhood friendship and her idea for a doctoral thesis. In three interconnected stories, ‘Chatpata’, each told from the viewpoint of a family member, a father and his two daughters look for a new way forward after the sudden death of their mother (his wife).