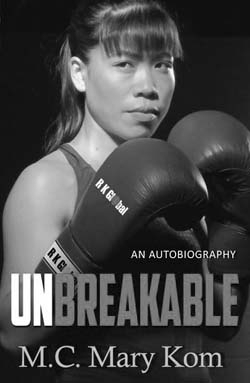 In the past few years Indian sportspersons, like their western counterparts, have exhibited unusual interest towards telling their personal stories in the form of authorized biographies or autobiographies. While it speaks of the exceptional cultural gains that the autobiography has made in recent times, it also points towards the growing ‘market’ of sports as a whole. These life-narratives are not just restricted to the on-field achievements of players. Mary Kom’s life-story Unbreakable: An Autobiography is more than a personal narrative of punches exchanged in the boxing ring, it is equally about Manipur and the tribal Kom community she hails from.

Being acutely aware of her ‘inability to communicate effectively in either Hindi or English’ (p. 55) Mary Kom hands the responsibility of transcribing her tale over to Dina Serto, a lecturer in history at Imphal’s G.P. College. Actively engaged in chronicling the Kom community as a historian, Serto weaves in anthropological details of the Kom tribe. The well-defined roles of men and women, their belief in black magic, the serious affair of naming the babies, the architecture of bamboo huts, the farming activities, and the division of land—all cultural aspects develop meticulously in the narration dovetailing the boxer’s personal life in it. The elaborate descriptions of wedding rituals such as the ‘boiling tea sessions’ and ‘thanksgiving feast’ remind every bit the readers of Nigerian writer Chinua Achebe’s similar insights into the Igbo culture in his path breaking work Things Fall Apart. Dina Serto thus seems to be a shareholder in Mary Kom’s desire to ‘popularize the culture and ethos’ of her tiny tribe (p. 53).
Unbreakable: An Autobiography is a representative life-story that blurs the distinction between ‘I’ and ‘We’. It speaks at a larger level about the political scenario in Manipur and its adverse effects on the lives of people. Mary Kom laments that ‘with a population of a mere twenty-seven lakh, it is home to over thirty militant groups’ (p. 74). Mary Kom’s family becomes a direct victim of violence when her father-in-law is killed by the militants and her husband plans to avenge his father’s death by joining insurgency himself. The book devotes a full chapter to people’s struggle against militancy but it refrains from discussing the part played by civil rights activist Irom Chanu Sharmila in the battle against violence. In the insurgency ridden Manipur, Mary Kom reckons sports to be something more than a leisure activity as it may ‘channel the energy and frustration of at least some of those youths who could otherwise join hands with militancy’(p. 133). However, the book in an undertone tends to question the potential of sports in the making of the nation partly because of lack of ‘merit’ attached to sports and partly because of the politics of sports administration in India.
Using the autobiographical medium for a serious objective, Mary Kom’s life-story challenges the idea of nationalism based on the physical looks of an individual or a community. She broods over the fact that because of ‘our oriental looks, people from the Northeast are often mocked in other parts of India. We’re called Nepalis, or Chinkies, and people call us names like ching-ching chong-chong’(p. 91). However, Mary Kom identifies herself more with Bruce Lee, Jet Li and Jackie Chan than with the Hindi films heroes but that is chiefly because of her love for martial-art movies. She in fact equally condemns the people from Manipur who ‘refer to people from mainland India as ‘Mayangs’, or non-Manipuri’ (p. 91). The book therefore is an appeal against racism; an issue that was once taken up in the Bollywood film Chak de India as well.
Mary Kom’s life narrative hence seems to be an account of an ‘other’ at various levels. Hailing from a marginal region in India, her otherness is further aggravated by her state of being a tribal, a Christian, and most importantly, a woman. The disappointment of her mother at her birth confirms how even women participate in the consolidation of patriarchy. Boys are given preference and the discrimination inculcates in a woman a desire to become a man. At many places in the text Mary Kom seems to be a victim of this desire—‘I preferred boyish clothes’(p. 15); ‘I was more like an elder brother than a sister to them’(p. 21); ‘Most of my friends were boys’(p. 26).
The regulatory control of patriarchy tries to dash Mary Kom’s spirits even after she becomes a mother: ‘Sanahen, now that you’re a mother, it’s enough. You will be tired. Stop boxing’ (p. 82). Motherhood, with all its prescriptive constrictions, hereafter becomes the subtext of the book, until Mary Kom nails it with her Olympic bronze medal. The autobiography acquires for itself a larger role as the sports-person as its protagonist takes on the cause of women in general.
The title of the book is both symbolic and suggestive. The word ‘unbreakable’ used as a noun for Mary Kom suggests that there were certain antagonistic forces that must have attempted to break the spirit of the five times world champion. The metaphor that she chooses for herself is that of David and Goliath where the diminutive David (Mary Kom) takes on Goliath(s) like patriarchy and insurgency. The hardships that she faces for being an ‘other’ or a marginal are compounded by poverty which is a leitmotif of Mary Kom’s life narrative. There were occasions when the family was dependent upon seasonal fruits to quell their hunger. Therefore, the journey from the embarrassment of not being able to pay the school fee on time to the photo shoots with the film stars in Bombay makes the autobiography a perfect ‘rags-to-riches’ account.
A mother of three, Mary Kom is all set for another stint in the Rio Olympics in 2016. However, not having a sports-journalist as its ghostwriter or co-author, the autobiography fails to exploit the performative space of sports, and consequently, the book lacks the detailed graphic description of every punch thrown and each point scored. Despite this, a chapter or excerpts from this autobiographical narrative would make way into school textbooks one day for necessary reading.

Parvinder is a Ph. D research scholar in the Department of English and Cultural Studies, Panjab University, Chandigarh.