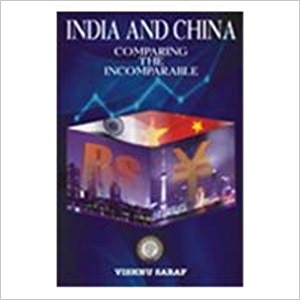 Beginning from the year 2000, a year that marked the 50th anniversary of the setting up of diplomatic relations between India and China, the recent rise of China and India has witnessed a proliferation of literature on these two large and fastest growing economies of Asia. Given the newsworthiness as also the inevitable news-like tenor of these studies, the bulk of them, at best, only update existing information. The focus of these largely comparitive studies invariably remains on populist indices like gross domestic product (GDP), foreign trade (FT), foreign direct investment (FDI), foreign exchange reserves (forex), or the number of billionaires, with only few studies making an effort to go beyond these simplistic measurements.

The value addition of these studies is viewed often in terms of selection of sources and in configuration of contents and themes for discussion as also the rank, training or experience of their authors. The exceptions to this rule, i.e., books on comparison with insights, can be counted on one’s fingers.

At its face value, therefore, the book under review by Vishnu Saraf appears to be making another such comparison though reading it makes one see that it charts its own course in highlighting at least some of those less debated nuances and subtleties of the aforesaid populist parameters. It refreshingly brings in several such sharp arguments and also uses several new and recent resource materials to further strengthen some of these well-known home-truths of India-China comparisons. Its method to explain several complicated formulations in an extremely simple manner seems to stand out as its major strength. Especially, its language is lucid and keeps the reader glued and, its use of inbox highlights, crispy sub-titles, popular quotations, episodes, and pictorials make this book fun and less taxing a read for the general reader. But it also sufficiently engages an expert and definitely makes a far more serious read than a coffee-table book or even a manager’s manual though it carries some of the reader-friendly salience of that flavour.

To the credit of the author, this book reflects an extensive survey of most of recent publications and use of most recent financial and policy research institutions’ assessments that remain its forte. This makes it especially of use to policy-making and business communities seeking short and readymade answers to their questions. On the issue of FDI, for instance, apart from presenting the usual statistics, it highlights several soft areas like how both China and India employ different methodologies (p. 7) in calculating their FDI. This seems to help unfold the puzzle of India’s FDI being so small and lagging in comparison to that of China. Similarly, it underlines how despite China’s opening up preceding India by two decades and China’s domestic savings being twice that of India and its FDI being eight times that of India, only one Chinese company figures in the Forbes list of ‘Asia’s Fab 50’ while India accounts for eleven such names (p. 73) as also how India’s GDP growth rate remains only marginally behind China’s and how Indian growth trajectory shows the potential to overtake China in the near future.

It is in the last part of projecting (the future of) India that the book seems to betray some of its bias in favour of ‘Mother India’. It is here that some of the oversimplifications of this study become too glaring to ignore. For instance, India is repeatedly praised as a democracy while China is condemned as an authoritarian state with the former following a bottoms-up approach and the latter a top-down approach to policy-making which portrays extreme simplicity of analysis. Similarly, it emphasizes how unlike China, India lacks strong political will and effective administrative machinery (p. 19) and how empowerment of government happens only at the cost of loss of individual freedoms (p. 20) which completely misses the huge grey spectrum so central to these two civilizational vision-formulations.

In the same vein, Saraf underlines how the aging population of China would mean that over 400 million people in China will be over 60 years by 2035 AD. India, by comparison, is projected to stay young for several decades to come. But these news headlines have several nuances underpinning their correlation to indices, amongst others, of heath and education. Also this misses the point that China is not the first rapidly developing country to face this ‘paradigm shift’ (the West clearly continues to depend on the developing world for most menial jobs) as also the fact that the Chinese are not sitting pretty in this coming crisis. Indeed, it was about seven years ago that Gordon G. Chang had first produced his bestseller on The Coming Collapse of China and the world has since been waiting, rather anxiously to distinguish between prophecies and populism.

No doubt, Saraf is dealing with two rather complicated big-sized Asian societies that are rapidly transforming at a pace that makes comparison difficult. The fundamentals of human knowledge seem increasingly inadequate to fathom some of these trends unleashed by the rise of China and India. The G-7 has been trying to stay useful by becoming G-15, purchasing power parity (PPP) and not per capita income (PCI) has become the basis of national economic power and it is China, and not UK or US, that today boasts of being India’s single largest trading partner. This is only representative of how their rise seems to challenge much of our conventional wisdom. A small book thus presents serious space limitations presenting its author with hard choices on what to examine and who should be one’s target audience. And, as also stated in the book’s Foreword, the author seems to have made the larger readership, and not experts, his target audience, which is fair.

In conclusion, it is building infrastructure, tax reforms and education that are highlighted as three major lessons (p. 127) for India while China has the challenge of sustaining this high rate of growth forever. It also has an additional chapter as an appendix which seeks to answer another complicated question: Is the Chinese currency undervalued? The answer stresses on the unfairness as also domestic compulsions of China without highlighting the positive role that a stable yuan played in ensuring the quick recovery during the East Asian financial crisis of the late 1990s. Also, the book remains based almost exclusively on western source materials that remains its other major limitation. This can be seen as suspect for bringing in its own flavour in its narratives. This is in spite of the fact that the Chinese are now publishing their own accounts in English and other foreign languages which are easily available both in print and online. Similarly, some of the known mainstream contributions from the Indian side are missing and could have been part of its narratives.

In the end, the book is clearly a well written general reader which makes an excellent reading on the India-China comparison from an Indian perspective. It is likely to be widely used by government and business leaders who remain its target audience. In this it remains especially sharp in highlighting various weaknesses of the Indian system especially those in comparison to China. The book for sure deserves two cheers for making such a brave attempt in highlighting the cliché of ‘incredible India’ which seems equally befitting for both India and China as also true for making any comparison between these uniquely distinct and rather complicated models of society, politics, and development.