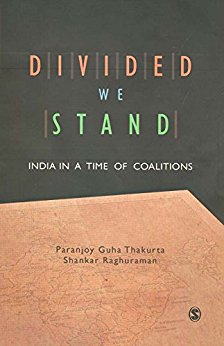 Since the 1960s, when coalition governments were formed in several states, coalition politics has engaged both political scientists and commentators alike on Indian politics. With the coalition governments becoming the norm at the union and the state levels in the last two decades, there has been a resurgence of interest in the theory and experience of coalition governments in India and their future consequences to India’s polity. The book under review Divided We Stand: India in a Time of Coalitions is one more addition to the growing literature on coalition governments. But the authors are not political scientists. They are journalists with considerable experience in the print and electronic media. It is amazing to find how Indian democracy has come a long way from the one dominant party system of the 1950s to a coalitional party system of our times. What we have now is not just a bi-nodal coalitional party system, as Balveer Arora characterized it, but four clusters of parties (UPA, NDA, UNPA and the LF) trying their luck in the electoral arena,

apart from a few other major parties jostling for power and biding their time to join one or the other front. The question asked in Indian politics these days is which alliance, not which party, will win the elections next time. The number of parties that hold power at the union or state level in India is simply astounding. Thus far, six national parties and 43 state parties have ruled or shared power either at the union or state level at some time or the other during the last decade. There are no longer any permanent ruling and permanent opposition parties in India.

Within a few years after political scientists came out with formulations on the character of the Indian party system in independent India, cracks began to appear in the one dominant party system. The 1967 general elections marked the breakdown of the Congress system and the emergence of coalition governments (Samyukta Vidhayak Dal governments) in seven states. In a seminar on ‘Coalition Governments in India: Problems and Prospects’, held in 1970 at the Indian Institute of Advanced Study, Shimla, several leading political scientists of the time felt that coalitions were the logical outcome of democratic politics in a vast and diverse society such as India. They felt that coalitions were likely to continue in the years to come in several states. What they did not visualize then was the emergence of coalitional politics in the national arena so very soon. Today, very few would endorse the scepticism that once marked the writings and views of political commentators of the 1970s and 1980s who saw the formation of coalition governments as unfortunate, for causing political instability.

All the governments formed in India at the national level after 1989 had been coalition governments, with the exception of the one headed by P.V. Narasimha Rao. A large number of governments at the state level too are coalitions. If we look at the governments in different states over the past 10 years or so, we realize that there are not many single-party governments. Given the fact that the major states of India are larger than many major sovereign nations of the world and each state brims with diversity and multiple identities which are often brought into the open due to intense intra-state elite and political competition, coalitions at the state level have become the dominant feature. Only Gujarat, Madhya Pradesh and Rajasthan are exceptions to this trend, where the political competition is largely limited to the two biggest national parties.

The authors of this book have taken a ‘generalist approach’ to Indian politics. But what these two journalists have achieved by way of material collection and covering various aspects and issues involved in understanding coalition governments in India is quite commendable. They are strong in narrating political developments in the country over the past few years. They have also paid considerable attention to factual details about parties such as the Congress, BJP, and other major regional parties. Sections on prominent political leaders such as L.K. Advani, Mayawati, Lalu Prasad Yadav, etc. are useful for those interested in biographical sketches of the current leaders of the country.

If the authors take a favourable view of coalition governments in India it is not clear why they chose a title for the book which goes against their position. The term fragmentation too acquires a negative connotation akin to those who view coalitions as inimical to India’s national unity and stability of governments. The authors do not seem to appreciate the point that coalitions are not about divisions and fragmentation, but about bridging, bonding and bending—bringing together social segments who strive to secure their collective entitlements and parties who compete for power in the name of these collective entitlements. If coalitions are a logical expression of the heterogeneity of the Indian society and a manifestation of deepening democracy, why do the authors say that coalitions are a manifestation of the fragmentation of the Indian polity? If we understand fragmentation, on the lines defined by Sartori, as a condition in which many parties exist and none of them approaches an effective majority, they are right. But a mere increase in the number of parties should not be construed as fragmentation. Although at first glance there seem to be too many parties in India, the effective number of parties is not very high, which stood at 7.47 in the 2004 Lok Sabha elections.

In the chapter on economic policies, the authors on the one hand say that the ‘chaos’ in the economic policies is a result of deep-rooted ideological differences that have existed and continue to exist among the disparate constituents of the NDA, the UPA and the parties supporting the later. But they also argue that there has been continuity in the liberal reforms irrespective of the parties that form coalition governments at the union level. They say the UF continued the same policies as the ones introduced by the previous Congress government. The Common Minimum Programme of the UF was imbued with a ‘pro-reform stance’. P. Chidambaram, ‘an enthusiastic liberaliser’ was the commerce minister in the Congress Government and then Finance Minister in the UF Government. The NDA too followed liberal reforms with more vigour, in which there was a minister to oversee disinvestment and privatize public sector units. The authors say that parties follow the path of liberal reforms while in power, and criticize such policies while in opposition. If that is the situation, where were the deep-rooted ideological differences, chaos and confusion? That there has been a decline in ideological differences among parties is clear from the fluidity of the coalitions and the ease with which parties can shift from one coalition or alliance to the other without much disquiet among the rank and file of the party or protest from other partners in the alliances. Actually, what we have seen in the party domain over the past two or three decades is that the parties that are located at the extremes of the ideological spectrum or on either side of the centre have tended to move towards the centre.

In the last chapter, ‘Looking Ahead’, the authors raise a few pertinent questions. But the answers are vague and evasive. For example, the opening question was how long the era of coalition politics would continue in India. Answer: ‘The answer [is] a more difficult one’. The next question was whether India is heading towards a two-party system. Answer: ‘The country may remain multi-polar for quite a while. If anything, the polity could get even further fragmented in the immediate future’. Towards the end the authors say that the coalitions ‘could make a major contribution to deepening and strengthening Indian democracy’, but lapse into general talk about problems of education, health, economic inequalities and social discrimination.

This book is an updated and revised version of an earlier one brought out by the same publishers in 2004 under the title: A Time of Coalitions: Divided We Stand. Now they call it Divided We Stand: India in a Time of Coalitions. What the authors wanted to convey by transposing the two terms in the title of their previous version is not clear. Actually, much of the new book contains the same material as the old one, except the chapter on the UPA government that deals with the 2004 election results and the working of the government thereafter. The titles of other chapters are also changed but the content remains much the same as the earlier one. The authors and the publishers should have called this book a revised edition of the 2004 book rather than putting it out as a different one.

K.C. Suri is Professor in the Department of Political Science, University of Hyderabad.