Paeans to a Rising India 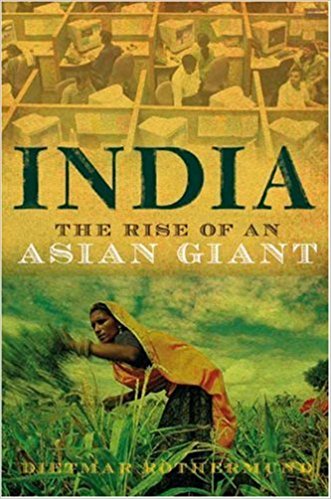 As a senior European academician who has devoted a whole life to studying South Asian history and politics, Professor Dietmar Rothermund is best equipped to chronicle the rise of India as an ‘Asian Giant’. He has been visiting India for nearly five decades, and is a familiar face to Indian policy-makers and leaders. He has now produced a comprehensive book that can only be called a lover’s ode, a work that he has probably been wanting to write all these years but only in the last decade did the objective conditions permit him such a romantic engagement. The rise of China and India as the fastest growing economies of the world has captured the western scholars’ attention. But Professor Rothermund avoids the fashionable comparison between India and China; instead, he plays to his strength and concentrates on those factors and forces that have helped the Indian state order to acquire the requisite inner resilience to engage confidently with an increasingly globalized world.

The basic argument is spelt out in a very brief prologue itself: ‘The Indian giant is rising like Gulliver after being released from the web of threads with which he has been pinned down. The rise is a laborious process which is still in progress, and it is irreversible. India’s captivity was self-imposed; after attaining Independence, it experienced a long period of voluntary isolation. This contributed to the development of the inner strength of the nation, but it also fostered an introvert mentality and resulted in a lack of competitiveness. Finally, India broke out of this charmed circle of isolation and boldly faced the challenge of globalization.’

The rest of the book is an elaboration of this theme, with a comforting assumption that the giant has indeed arisen. Because of his desire to produce a comprehensive account of the new rising India, he necessarily has to limit himself to scratching the surface. He has produced excellent postage-stamp size accounts; each rich, intricate and colourful, making a very pleasing album. He relies mostly on secondary sources, though he did conduct some interviews, including one with Prime Minister Manmohan Singh, for this book.

In sharp contrast to the condescending tone of the American scholar and the patronizing tone of the British academician, Professor Rothermund has deployed a sympathetic tone, and in the process has managed to produce a very self-sufficient introductory book for European students who may be interested in the South Asia story. He is also at pains to put at ease at least the European audience that (perhaps unlike China) there is nothing to be worried about a rising India. He finishes the book with an assuring sentence: ‘Visitors to India will come to know that the Indian giant is a friendly one who does not threaten others, but aims at peaceful co-existence.’

The bulk of the book is devoted to describing the changes the post-1991 economic liberalization has produced—in policy regimes, among political leaders, commercial classes, entrepreneurs, scientific community, the middle-class-led new consumer, as also the redefined involvement of a dynamic diaspora. The story is told competently, without the academic’s weakness for the jargon and cluttering and confusing statistics. Also, the author refrains from making moral or even political judgments about the changes; till the very end he chooses to remain a detached but engaged observer. However, the account does become insightful when Professor Rothermund combines his new fascination with recent economic growth with his old and solid understanding of the political economy of the Indian state. For instance, after clinically charting the rise and spread of the new middle class, and concluding that ‘this class is not spread at all even across the nation but is regionally concentrated around a few centers’, he correctly infers that ‘this class cannot impose a hegemony of its lifestyle and aspirations on the masses of India.’ The chapter on ‘the persistence of poverty’ restores some balance in an account that otherwise ought to be pleasing to the chambers of commerce, pink press editors and other ‘reformers’ who have been seeking to impose their ideological hegemony in the Indian political exchange.

The somewhat cursory account of the political context of the new economic India, confined to three chapters, is far from satisfying, especially because Professor Rothermund has spent so many decades studying and writing about the intricacies of a wobbly constitutional and political institutional matrix. Even the very brief chronicling of the rise of regional forces is uncontaminated by realities. Take for example the treatment of Chandrababu Naidu. ‘For a while he appeared to be the rising star in Indian politics. He championed information technology and even impressed a visiting Bill Gates with his methods of e-governance. But in the elections of 2004, which in Andhra Pradesh happened to coincide with the parliamentary elections, Congress swept at the polls and the TDP [Telugu Desam Party] was reduced to a humble majority.’

The reader is not told why Mr. Naidu lost, and whether this electoral defeat had anything to tell us about the vigour with which the TDP boss pursued economic reforms. Why was it that Mr. Naidu could impress a visiting Bill Gates but could not carry conviction with the Andhra voter? Or, the reader is told as a matter of fact that the 2002 elections to the Jammu and Kashmir assembly was a ‘free and fair’ exercise, which resulted in the People’s Democratic Party-Congress alliance handing a clear defeat to the Abdullahs’ ruling National Conference. Is the reader not entitled to some explanation how the electoral exercise became or was allowed to become ‘free and fair’ and by whom and why?

The overall problem with Professor Rothermund’s account remains that while he has clinically and dispassionately chronicled the story of economic growth, he does not pay sufficient attention to the Indian state’s limited institutional efficacy. There are very few clues to the problem of the centre’s control over the periphery; nor is an idea given of the political fragmentation, absence of an enduring national elite, institutional decline of the party system; all combining to produce an unsettling precariousness. The disappointment is all the more keen because Professor Rothermund has the necessary experience and insight to have given us a rounder and a more satisfying account. The new India could take in a bit of critical judgment.