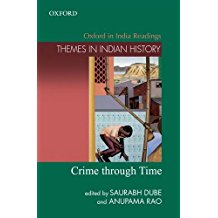 In the past few years, India has witnessed a renewed interest in the category of criminal acts ranging from corruption to cases of violence against women. In the light of such debates, Crime Through Time, a collection of writings on crime in the Indian subcontinent covering about 200 years, is topical indeed. As the editors of the anthology point out, the history of crime is also a history of law as well as evolving ideas of justice. Defining what constitutes a criminal act has always been the prerogative of the state and is an important aspect in the exercise of asserting legitimacy and sovereignty. And yet at no point has this function of the state remained uncontested; constant subversion of a disciplinary apparatus through wilful transgressions or everyday practices of the subjects meant to be ordered. The contributors bring to relief the discursive production of crime and the simultaneous institutionalization of the legal system, obscuring its historical genesis.

The first revisionist trend for the historical study of crime came from the emerging historiography associated with the English social history. Pioneering works of E.P. Thompson, Eric Hobsbawm and George Rude looked at instances of criminal activities and violence and ascribed new meanings and imaginations to them. Thompson’s idea of ‘moral economy’ and Hobsbawm’s ‘primitive rebels’ emerged as two of the more influential ideas that recast crime and criminals in a new light. As the editors outline, in considerable detail, this renewed interest in legal history or history of criminalization was further buoyed by the works of Michel Foucault. His ideas on power and the myriad ways in which subjects were disciplined into law-abiding citizens have fundamentally altered decades of writings on the subject. While giving considerable space to these two paradigms on the subject, the authors do acknowledge the ways in which these approaches have come to be challenged/ modified with the works of scholars such as Giorgio Agamben or Philip Abrams and new reading of earlier scholars such as Walter Benjamin. However, this mapping has largely been relegated to a breathless endnote to the introductory passage.

One of the central ideas that the collection tries to address, through its focus on crime and legality, is the continuity evident in the regimes from the eighteenth century onwards. As the editors point out, the earlier ideas of ‘transition’ or ‘rupture’ stand corrected and such sensibility needs to be reflected on the writings on the subject of crime as well. The authors are not arguing for a seamless transition from one regime to another but instead making possible for a longue duree within the context of the subcontinent. Such an approach helps us discern not just the ‘continuities and transformations at stake from the perspective of crime and law’ (p. xxviii) but also the ‘distinctive form of conquest’ that was at the foundation of the making of the colonial state. The collection of articles is distributed among five broad sections—Precolonial Premonitions’, ‘Colonial Concerns’, ‘Surveillance and Subversion’, ‘Legalities and Illegalities’ and ‘Postcolonial Predilections’. In doing so the ‘long duration’ being imagined is not just that calls the rupture of eighteenth century into question, but one that brings to relief the institutional (juridico-political, in this case) carry over to the postcolonial state with its own ideas about sovereignty and constitutional governance.

Such continuities are seen in the works of Rajnarayan Chandavarkar and Anupama Rao in the edited volume under review. Chandavarkar’s essay, an excerpt from his celebrated work Imperial Power and Popular Politics, looks at how a study of ‘everyday policing’ and the constraints upon it reveal a very different picture of the institution of policing. Looking closely at the working class neighbourhoods, colonial police comes across as deeply enmeshed in the local structures of power, much of which is linked to caste and pre-urban factors. Similarly, Rao looks at the episode of a murder of a village kot-wal—belonging to a lower caste—and how the investigation that ensues shows the fraught relation between the postcolonial state’s stated commitment to protectionism, the growing assertion of caste-based political mobilization and the individual caste, local compulsions that constitute the actions of the officiating individuals in this case. The murder of the kotwal is not an isolated case but in Rao’s work stands for a larger process of state-society relationship. Both Chanda-varkar and Rao try to locate practices of institutions within their local contexts and how it undermines the state’s desired agenda at the level of practice.

In contrast, Tanika Sarkar’s essay stresses the edifice of violence intrinsic to the RSS/ VHP ideology and how it is sustained through not just fidelity to rituals but also by deferring the underlying gendered, caste- and class-based biases of such violence. What she shows effectively is that the language of everyday violence and the ideological propagation of it itself engenders/ perpetuates a bigger ideological apparatus. These and other essays are constantly challenging the relation between the structures of power, individual practices and collective mobilization—a relation that is not solely premised on the supporting mode of production.

Similarly, the collection brings together works that have important implications for the methods of historical reconstruction by Ranajit Guha, Sumit Guha and more recently, Saurabh Dube. Ranajit Guha’s work has been seminal to the study of agrarian history especially with the political content of peasant insurgency while Sumit Guha’s and Dube’s work have looked at a wide array of pre-colonial, oral and other records. Scott Kugle’s important essay on the canonization of Islamic laws and the imposition of a European idea of precedent and Radhika Singha’s work on the colonial state’s efforts to limit the mobility of social groups using Thugee laws also finds space in the collection.

The edited volume brings together some of the most important works on the subject and selections show how the history of crime has been able to advance our historical understanding on registers of caste, tribes, gender, class and region. What can perhaps be desired of such a collection is some print space to newer methods in the study of crime. In recent times, study of crime fiction, novel and mediums of visual representation including cinema or photography have done much to help the contemporary understanding of crime and its discursive construction. This is not to suggest that the authors are not aware of the newer approaches in the field. Their introduction makes an attempt to trace the beginning of their project to Arvind Adiga’s The White Tiger and also discusses, albeit briefly, some of the landmark cinema in the Hindi language on Bombay and its underworld. An incorporation of some of these approaches would have added to the collection and added further to methodological approaches to the subject. Which raises also another question about the introductory essay. While the works of English social historians or Michel Foucault has been of great significance within subcontinental historiography, of equal importance has been the work of the Subaltern Studies Collective and its Marxist predecessors.

The introduction does very little to discuss historiographical trends from within South Asian scholars and the ways in which they departed from their European counterparts. An argument can be made that such a detailed survey is unnecessary in a collection by South Asian scholars and that a discussion of their works in itself is a reflection of their historiographical concerns and commitments. And yet, a historiographical review which does not correspond to the Ur-texts discussed in the introduction could only help contextualize the essays better. The idea of the collection is not to build an anthology of all works on crime but one feels that an essay representing ideas of environmental history or spatial-urban history could have helped in furthering how crime is constructed not just within different social groups but also different geographies and ecologies.

These are questions of selection process and perhaps one can quibble tirelessly on the acts of both commissions and omissions. What we have in our hand is a work that is held together well by the contributing essays and represents some of the editors’ concerns with continuities, long term changes and discursive-legal construction of crime with sufficient emphasis.

Shatam Ray is a Ph.D candidate at the Department of History, Emory University, US.