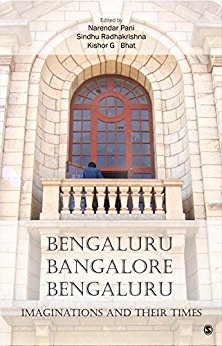 Narendar Pani, In his introductory essay, states that the book was compiled in the wake of an absence of ‘a collective effort to recognize. . . (the city’s) past (4).’ After noting that a dialogue between ‘the present and the past’ . . . has never gathered momentum in Bengaluru,’ he offers an intriguing explanation for it:

And this lack of support for history can be traced to a single fact: all through Bengaluru’s often tumultuous history, the emerging dominant groups have had little reason to celebrate the past. . . As the emerging economic powers put their own stamp on the city, they had no reason to celebrate earlier traditions that they were trying to replace. On the contrary, it helped to ignore the previous avatar of Bengaluru. And the best way to do so was to play down, if not completely ignore, the history of the city (p. 5).

While underscoring the necessity of a dialogue with the past, Pani wishes that presentist concerns do not govern the appropriations of the past and that the imaginations from the past be appreciated in themselves. He also clarifies that the book does not offer interpretations of either the motives or the historical circumstances behind those imaginations. Delegating that task to the readers themselves, the editors only offer framing notes to their chosen texts.