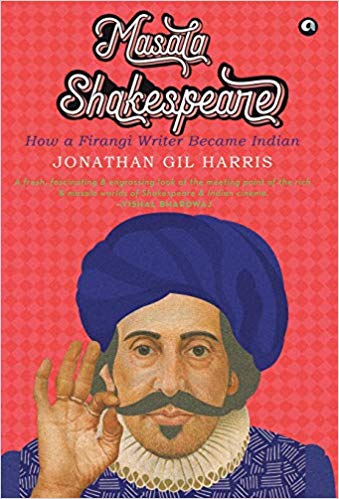 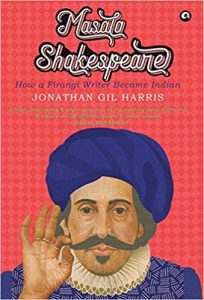 Shakespeare and India have had a long, nearly 250 year old, relationship which has gone through many phases and has been the subject of much comment and some study. Masala Shakespeare by Jonathan Gil Harris is the latest attempt to address this interaction. It is a highly personalized view of a western academic trying to come to terms with an ‘India’ best represented to him by its Shakespearean interactions. According to him the concept of ‘masala’—a spicy mixture—epitomized by Bollywood formula films sums up most aptly not only Indian versions of Shakespeare, but also the hitherto disregarded but essentially plural dimensions of Shakespeare’s craft. These two, Shakespeare and India, he believes are ‘twins’… ‘as similar as do angoor’, the output of both comprising mixed up genres, languages, ‘double identities, double meanings’ and ‘double locations’ with ‘naach gaana’.Through five chapters with sub sections, representing the five act/scene structure of the Shakespearean play, he takes us on a breezy, very wide ranging, informative, at times witty and allusive ride through twelve plays of Shakespeare which have figured prominently in the Indian performative sphere, particularly in films, but all refracted through a masala drenched lens. Thus, the Comedy of Errors, Twelfth Night, Midsummer Night’s Dream, Romeo and Juliet, The Taming of the Shrew, Macbeth, Othello, Hamlet, King Lear, Titus Andronicus, Pericles and The Tempest and their Indian redactions are seen as existing in ‘a world of masala’ and interpreted according to entities of ‘masala identities’, ‘masala lovers’, ‘masala languages and idioms’, ‘masala sensibility’, ‘masala genders’, even ‘cosmic masala’, all of which lead him to the conclusion that ‘India with its mixed up genealogies has always been Shakespearean. Indian masala and Masala Shakespeare are twins’(p.26).

This ‘masala’ also has a political dimension: according to Gil Harris it represents the characteristic ‘mixed-up’ culture of India which is in danger of being erased. The book becomes a tart commentary on current affairs too in its attempts to weave in and inter-textualize happenings like the Anti-Romeo squads, protests against Bajrangi Bhaijan, ‘100 Ramayanas’, Swachch Bharat etc., towards explicating Indian adaptations of Shakespeare, as also providing evidence of the damaging drive to singularize and ‘purify’ Indian culture.

This primary premise of the book, however, poses many problems: the metaphor/trope of ‘masala’, though ostensibly of multiple piquant flavours or modulations, is limited and overdone. Gil Harris emerges as an over enthusiastic masalchi, indiscriminately applying the same mixture of more-than-one blend to widely varying texts and situations. His analyses of Shakespearean redactions, dunked in the same spicy concoction, (rather like the ready-made English ‘curry powder’ additive) tend to blur rather than to refine his critical observations. Nothing reveals it better than his reference to the Sufi vision of love, of the Andalusian poet Ibn Al-Arabi. Positing Al-Arabi’s poetry, which emerges out of 12th century multicultural Spain, as an influence on French troubadours and Renaissance Italian poets, and through them as a possible progenitor of Shakespeare’s vision of romantic love as embodied in Romeo and Juliet, is a fresh light on an old debate, but it tends to get submerged in the welter of other insistent masala mingling and border crossing comments. His observations on Sanjay Leela Bhansali’s Goliyo ki Rasleela Ram-Leela as being closest to the love-hate paradox of Shakespeare’s original, among the many Bollywood versions of Romeo and Juliet, would shift the terms of discussion in adaptation studies. But again, only if he would reign in his fancies which lead him to vision a ‘cosmic masala’, of a Radha Krishan type of divine transcending love in Bhansali’s gory double-edged tragedy too.

Similarly, his close reading of the use and multiple implications of ‘untimely’ by Macduff, the witches and the porter in the play Macbeth would be substantive if it were not lost in the narrative twists and turns which jump to the Gunpowder Plot, to tenuous connections  between Hiranyakashipu and Macbeth (!), the festival of Holi and masala: ‘like a Holi celebrator, then, Shakespeare flung powder in the faces of his audience, giving them a powerful experience of masala time’ (p.159) is the conclusion his mixed diversions lead him to. This ‘masala’ as a critical tool, as it is seen, does not blend or stick; its taste fails to gel and remains largely unpalatable and unconvincing.

The wide-ranging chapter on Hamlet, called the ‘pinnacle of masala entertainment’ (p. 204) reads the several Indianizations through the multiple ghosts and spectres of sexuality, madness and death which haunt the play. Its analysis of Haider, particularly, is sensitive in its elucidation of the personal and political ghostly presences and absences. Yet, here too, it sees only a ‘ghostly masala of multiple possibilities’, not an intervention, in the changed ending of the film.

On the other hand, the latest Indian cinematic adaptation, a masterly retelling of Titus Andronicus, The Hungry, and its VOD release, is dismissed by Gil Harris as ‘not masala’ and not Indian in style without naach gaana (though the film does have wedding songs and dancing too!) or high sentimentalism. His rejection of the noir aesthetics of this film which seizes the contemporary super rich Indian society by the jugular and exposes the horrors it can descend to, shows that Harris has a fixed and limited notion of masala and Bollywood and fails to appreciate that all mixtures need to upgrade and accommodate new tastes and generations. The Indian film industry, spread over many language cinemas and more than a hundred years old, has evolved a diverse number of genres over the years; to prioritize one as typically ‘Indian’ is misplaced. The pluralities of Indian culture and cinema are complex and not necessarily mixed-up: thus, neither Shakespeare nor his Indian versions emerge any the better for their masala additions.

Further, Gil Harris’s idiosyncratic use of the term ‘masala’ creates other issues: it undermines and erases more problematic usages—it has been heard as a term of racist abuse, like ‘poppadom’ and ‘paki’, and was vented against Shilpa Shetty in ‘Big Brother’ on British TV some years ago.

In the larger context, the book therefore foregrounds the critical issue of identity and positionality, an urgent locus of debate in the current climate of globalization, i.e., who speaks for whom and in whose voice. While it is gratifying that Gil is making much effort to home in India, calling this book ‘a love letter’, learning Hindi and trying out golgappas, his perspective remains that of the outsider, not squaring with his adoptive ‘we in India’ stance. His response to the film Lagaan, for instance, an obvious postcolonial film if any, is only as a classic Bollywood mixture of fantasy. If the audiences of the film, during his viewing, were leaping out of their seats, cheering the defeat of the English sahibs at their own game of cricket, they were also subliminally working out the humiliations of colonization, vividly encapsulated in the film in pre-match scene in which the British official barks at the Hindu Maharaja: ‘Eat the meat!’ who then is compelled to withdraw his presence. Gil’s privileged position allows him to rope in Hiranyakashipu, Brahma, Manusmriti, Bhagwat Purana et al in a fanciful unrestrained  manner which in other hands would be trolled as nativizing.

All this leads to a distracting unevenness in the book: sweeping journalistic generalizations pop up in the midst of serious interpretations, direct quotations are made without immediate reference, and there is scant acknowledgement of earlier work in the area. It is a pity that in the desire to popularize and spice up Shakespeare, it seems that academics who should be providing correctives, establishing facts and details about the vital Shakespearean input in Indian intellectual growth, should instead succumb to the entertaining and chatpata. What could have been an insightful book remains a highly personal one.