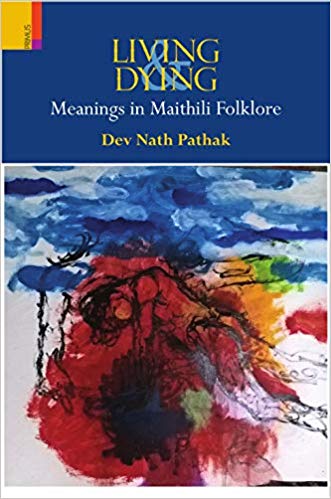 At its most basic level–and it has many levels of engagement–the book under review is about Maithili folk songs as well as living and dying.  Dev Nath Pathak tells us that the folksongs in Mithila he focuses on are mostly sung by women. And they tend to be associated with cyclical events, rites of passage, and quotidian situations of ordinary life. Living as well as death also fit into this scheme of things.They have much to do with emotions. This poetic form is located well within the folk tradition in which it is a part.  As a form of expression, these songs have considerable longevity, which is why many of their references tend to be historical and mythological. But at the same time, they are also very much personal and contemporary, and intertwined with temporal issues of the present. This is why many of the songs Pathak refers to also now have references to the nation and its association with gods. It is also this temporal grounding that has allowed contemporary melodies to be associated with this tradition.

This kind of folklore or poetic tradition therefore cannot be understood merely as something from the past or from mythological domains, a common mistake very evident in conventional folklore studies. Pathak has self-consciously distanced himself from this conventional position.  It is in this context that he has stressed the mediated character of such folk forms in contemporary times. Pathak notes, ‘it would be impertinent to foreclose the possibility of folklore and popular cinematic transactions, mutual influences, and reformulations of styles and content’ (p.3). In fact, some of the songs Pathak has listed  seem to be influenced by popular film melodies.

In this sense, what Pathak has written does not take us to the historical past or the hazy domains of mythic memory, but instead anchors us very much to the quotidian circumstances in the present. Some of the songs in the Maithil context used to be routinely invocated when confronted with the sorrow of death.  But today, such songs are displaced from the shadow of death, and re-invented in the circumstances of ordinariness. So it is not unusual that songs that may have been once sung during death vigils are now sung as a simple matter of singing as people go about their routine chores in the morning. Death, it appears, at least in this instance, to have lost its seeming fear and anxiety that usually befall the living. In this sense, a tradition may have survived over time although by transforming its context, and in that process, also displacing the original nuances of songs, and forcing us to re-interpret them in new circumstances.