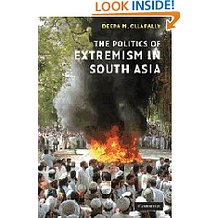 Mono-causal explanations cannot adequately capture a socio-political phenomenon as complicated as extremism. By opting for the term ‘extremism’ rather than the blanket term ‘terrorism’, she brings out various nuances while treating this complex subject. She enriches the current global debate about extremism by treating the state as a foreground variable rather than a background constant.

The book has eight chapters. The introductory chapter puts forward the analytical framework of the study. It takes the reader through major explanatory frameworks for extremism both at the domestic and global levels such as ethno-religious identity, relative deprivation, elite manipulation, state repression, lack of political access, globalization, and transnational networks. Having identified the limitations of existing explanatory frameworks, she offers a fresh framework for better understanding the issue of extremism. Informed by the insights of theorists such as Peter Gourevitch, the author focuses on the impact of external factors on domestic structures and preferences. Underlining the centrality of state actors in South Asia, she introduces the variable of ‘geopolitical identity’ (geopolitics of ethno-religious identity) and goes on to show clearly their influence in determining the level of extremism in the South Asian states. She discusses the pivotal role of the state in the interaction of internal politics and external geopolitics.