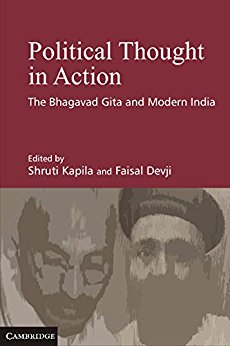 The book under review is a very welcome addition to the growing interest in mining older Indian intellectual traditions to understand and account for many of the diverse, and often contradictory, impulses of anti-colonialism and nationalism. The book assembles a notable range of older and younger scholars. The Introduction by the editors makes an indisputable case for the importance of the Gita to Indian intellectuals from the late nineteenth to the mid-twentieth century—the most well-known commentators include Bankim, Aurobindo, Tilak and Gandhi, amongst many others. They also usefully make the case that the ‘indeterminacy’ of the moral content of Krishna is distinct from his more familiarly politicized fellow-god, the ‘high-minded’ Rama. Though they focus on the Krishna of the Gita (glossing over the more historically and socially pervasive Krishna of Mathura), the point of even the Sanskritic Krishna’s distinctness from the heroic Rama (of either the Valmiki, vernacular or performative traditions) is uncontroversial.