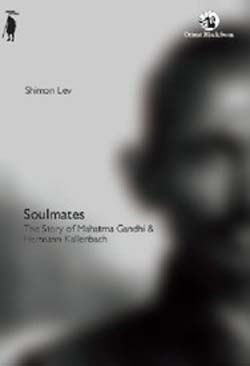 Two more books to the Gandhi shelf! Looks like a library will not be enough to house books on and by him. Yet Gandhi is never going to cease to be an enigma. Gandhi’s relationship with Hermann Kallenbach is difficult to understand in these times of narrow judgemental definitions of relationships distant from the context and complexities. The other difficult issue to fathom are his religious beliefs and attempts at reformation from within. The extraordinary friendship between Mahatma Gandhi and Hermann Kallenbach came into the limelight through Joseph Lelyveld’s The Great Soul—Mahatma Gandhi and His Struggle with India. Lelyved did not exactly suggest that Kallenbach and Gandhi had a homosexual relationship but some felt it was implied and were either outraged or excited depending on whether the reader was a Gandhi baiter or not. Shimon Lev’s Soulmates: The Story of Mahatma Gandhi and Hermann Kallenbach does not imply any such suggestions but gives an exhaustive account of the life of Kallenbach and the relationship through his eyes with material culled from letters, papers, photos and documents that have survived Gandhi and Kallenbach.