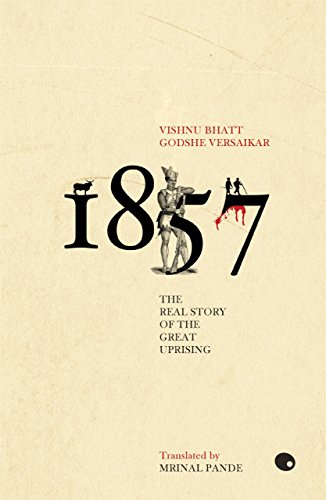 It is always interesting to read a real story, the real story—and this is one that is about the Mutiny/ the First War of Independence/ the Great Uprising of 1857. But what earns the right to be called the real story, the truth? The answer now is that the truth is what is perceived by ordinary people, what they experience and record for us. The assumption that is made, when people talk of the real story, is that you can’t find it in official accounts, that it is only in a mural of real stories, as many real stories as possible, that we may experience an approximation of the event, any event. So, the real story is always one of the many, and hence a real story (always taking into account the oxymoron created by the two words ‘real’ and ‘story’ coming together) is one that has been told among many others that may or may not have been told. So here is an eyewitness account of the uprising of 1857 told by a Marathi brahmin who was on an ill-timed visit to the North, to Hindustan, to earn money. Needless to say, the narrator Vishnu Bhatt had some interesting times. As had his narrative.

To begin at the beginning, Vishnu Bhatt Godshe Versaikar, born into a poor Chitpavan brahmin family of Versai village in 1827, the eldest of three brothers and a sister (whose marriages, including his own, had plunged the family into great debt), decided to travel to Hindustan with his uncle Ram Bhatt as escort to make some money from participating in yagnyas and other religious rituals, quite unaware of the unfolding situation. He begins his travels in early 1856 and very soon he becomes aware of the tensions in British India, when two soldiers who hail from Goa tell him about the simmering discontent in the army over the use of cartridges greased with cow fat and pig lard, thus infuriating both Hindus and Muslims. Vishnu Bhatt is told that the mutiny is only three days away and that the soldiers are deserters on their way back home. We realize that the narrative has already reached the first week of June 1857. We now have a ringside view to the events that marked that crucial year in the making of our nation – 1857.