A Corpus of Historiography 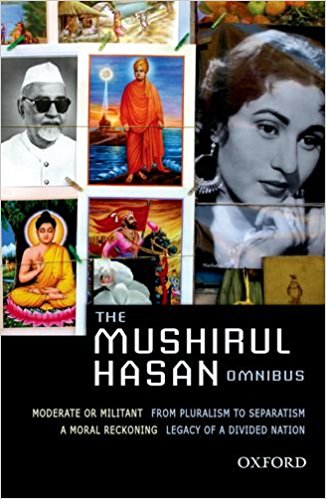 A Corpus of Historiography
Vikhar Ahmed Sayeed
THE MUSHIRUL HASAN OMNIBUS 2010: MODERATE OR MILITANT; FROM PLURALISM TO SEPARATISM; A MORAL RECKONING; LEGACY OF A DIVIDED NATION by Mushirul Hasan Oxford University Press, 2011, 252 pp., 1195
August 2017, volume 35, No 8/9

Mushirul Hasan is one of the most prolific historians specializing in the study of ‘modern Indian history’. His corpus of work is vast and consists of several monographs. The fact that he has authored/ edited twenty volumes only with one publisher (Oxford University Press), among others, should give the reader an idea of his output. It is, therefore only fitting that OUP has published a single volume of four of his well known works.

Hasan’s work has largely concerned itself with exploring, analysing and assessing the South Asian Muslims and the politics of religion during the nineteenth and twentieth centuries. He has doggedly pursued this research area for well over three decades now since the completion of his doctoral degree at Cambridge.

The volume under review spans Hasan’s published works of over a decade starting from his well researched work on the status and condition of post-partition Muslims in India (Legacy of a Divided Nation: India’s Muslims Since Independence) to his most recent work on Indian Muslims following a global concern with the image of Islam (Moderate or Militant: Images of India’s Muslims). Between the publication of these two books he turned his attention towards the qasbas of Awadh (From Pluralism to Separatism: Qasbas in Colonial Awadh) and the Muslim intellectual renaissance in nineteenth century Delhi (A Moral Reckoning: Muslim Intellectuals in Nineteenth-Century Delhi).