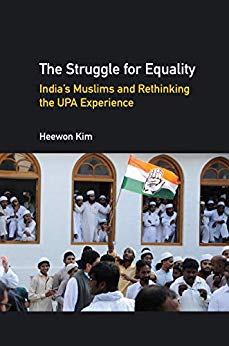 Three valid reasons could be offered to write a book. First, nobody else has written on that theme. Second, one has something original or different to convey from what has already been in the public realm. Third, one may be able to provide a different perspective, approach or terms of analyses on the given theme. While Heewon Kim’s The Struggle for Equality: India’s Muslims and Rethinking the UPA Experience  cannot lay claim to the first two reasons, the third reason is the primary motivation to deal with the subject with a new perspective. I found myself disagreeing with the newness/originality of the facts and arguments offered in the book, but I learnt a great deal from the freshness of the ‘historical institutionalised opposition’ model substantiated with empirical evidence to understand the United Progressive Alliance (UPA)’s policies towards minorities particularly Muslims during its term from 2004-2014.

Undoubtedly, the author has fairly explored the experiential and the institutionalized mechanism of ‘othering’, ‘marginality’, ‘under-achievement’, ‘under-representation’, ‘development-deficit’, ‘issue-misrecognition’, and ‘the securitisation’ of Muslims in the historical settings of India. Given these contexts, the author has evaluated the UPA’s policy performance within a set of interlinked questions regarding Muslims: How far were Muslims  accommodated in the UPA’s much acclaimed framework of ‘substantive equality of opportunity’? Did the new framework succeed or fail or both? Why did UPA fail to overcome the institutional opposition to improve the livelihood of Muslims despite being in power for one decade? What factors thwarted the implementation of measures recommended by UPA’s Committee and Commissions including the Sachar Committee, Ranganath Mishra Commission, Equal Opportunity Commission, Diversity Index and so on?

The Struggle for Equality is divided into six chapters exploring the interplay of religious minorities in the policy domain along with intellectually sharp ‘Introduction’ and neatly drawn ‘Conclusion’. In the ‘Introduction’, the author lays the groundwork of the book by contextualizing the exclusion and isolation of Muslims in global, regional and Indian settings after 9/11. In fact, the introductory chapter is the synoptic note on what is being dealt with in the entire book. The author has argued that the election of the UPA government in 2004 was a turning point for minorities because of its promise to deliver affirmative action policy initiatives to overcome the ‘development deficit’ of minorities. The UPA’s allegiance to ‘minoritarian cause’ was undoubtedly tactical, symbolic and performative and reflected in the UPA-I government like the appointment of the Sachar Committee and the Ranganath Mishra Commission, creation of the Ministry of Minority Affairs (MoMA), the Anti-Communal Violence Bill and so on. Yet, most of these initiatives were put on the backburner by the Government. The author locates the reasons for UPA’s reluctance to implement the incentive-based policy initiatives in the deeply embedded institutionalized opposition to these policies from three constituencies: the lobbying of SC, ST, and OBC groups;  the perceived resistance of civil society and judiciary; and the antagonistic articulations of Hindutva forces.