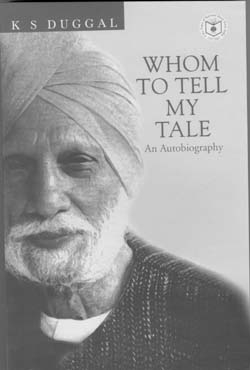 Whom to Tell My Tale is K.S. Duggal’sautobiography. When in 1985, Duggal published this autobio- graphy in Punjabi (Kis Peh Kholon Ganthdi) it was appreciated in a comparative way, because Amrita Pritam’s, Sant Singh Sekhon’s and Ajit Kaur’s autobiographies had already created a discussion about the genric developments. Amrita and Ajit Kaur were sensational in style and Sant Singh Sekhon was ideological and interpretative about the paradigm of history. Comparatively Duggal was more informative and observant about the time and society. Whom To Tell My Tale should be assessed comparatively in the growth of this genre in Indian Literature. The author, a well known fiction writer with 13 novels, 26 collections of short stories has written this book in a fictional style with a consciousness of history. He starts the narration from his birth, childhood and cultural ethos of Pothohar, but this autobiography becomes more significant when it narrates the tragedy of partition.

Duggal, again and again has portrayed this tragedy in his fiction and every time he narrates more tragic details. Autobiography gives him a chance to dwell on his own fate and experience during the days of partition. He is also analytical about that historical carnage:

Today when I look back, I ask myself—‘Where was the communal divide which led to carnage during Partition riots?’ It was evidently a creation of the misled politicians of the day in their quest for power whether it were Hindus or Muslims. The Britishers were always there to fan their differences rather than bringing the warring groups together to promote accord and amity. (p. 98)

The writer is not narrating and analysing only the carnage, he is also describing the time as a political event, because the political struggle for freedom was at the decisive turn. People were facing the hardships of that struggle. Duggal’s language creates combinative ideological signifiers and metonymic expression:

The times wre tumultuous. The freedom struggle was at its decisive stage. Every other day some tragic happening would take place—a shooting here, a killing there. Such incidents were called Sakas in the common parlance. Whenever a Saka took place, fire would not be lit in the hearth in our house. Everyone went without food. The children were fed only roasted grams like the jailed patriots who were said to be fed on roasted grams. We slept on the floor rather than in beds in sympathy for the freedom fighters who were imprisoned. (p. 36)

In his fiction also, Duggal is master of this style. His observations on the history of relations of India and Pakistan war or the political events after partition, not in detail, rather précised, are evaluative, convincing and factual. The author speaks with a historical consciousness: India’s relation with Pakistan, which were never pleasant ever since Partition had of late deteriorated. In one of his rallies, Liaqat Ali Khan, Prime Minister of Pakistan had flexed his muscles and challenged India. As a result, there was troop movement on our side. (p. 135)

In the same observational style, he speaks about China’s attack on India or other national and international political events. The other aspect which makes this autobiography interesting is the narration about other contemporary writers. We already know about those writers because some biographical writings are available by them or about them. For example, Amrita Pritam, in her autobiography Revenue Stamp, confessed her love for Sahir. But here Duggal confirms those ‘tales’ which we have about Mohan Singh-Amrita relations and how Mohan Singh inspired Amrita’s Poetry: Mohan Singh was deeply involved in Amrita Pritam those days as he did until his death. Though Amrita as she told me personally, never responded, Mohan Singh’s infatuation was unusual. A promising young poetess married in a well-to-do family, that (sic) she was charmed by a poetic luminary like Mohan Singh was quite natural. The Panj Darya, by now, was a leading literary journal, she needed to figure in it prominently. She cherished flattering references of her verse with which Mohan Singh was quite generous. She would occasionally come over to see him with or without her spouse, praise Mohan Singh’s new poetry which he eminently merited. (p. 71)

Duggal and Mohan Singh belong to the same village ‘Dhamial’, in Pothohar (now in Pakistan) and Duggal has discussed Mohan Singh in detail. He has referred to several other writers, the contemporary literary movements, Punjabi folk lore, folk culture, literary events and some anecdotal utterances of some significant writers. Manto appeared for an interview before the Selection Board of AIR and Duggal describes Manto’s satiric style: It was during this session that the interviewing board had asked Manto—What is your speciality as a writer? And Manto had replied—‘Visiting prostitute quarters in the red light area and writing about them.’ (p. 87)

Duggal narrates his early meetings with Ayesha; their marriage and how Ayesha stood by him in the days of struggle makes for interesting reading. Sometimes he portrays with a poetic consciousness. Through the book, we learn of several significant aspects of his life especially when he talks his days in Planning Commission and National Book Trust. He built the tradition of the World Book Fair in Pragati Maidan of Delhi. He discovered the method of book-consciousness in India and also developed the comparative way of literature and made us conscious about the emerging new epistemes in our knowledge.

Duggal is now a whole-time creative writer after his stint in the Rajya Sabha. He has also translated Guru Granth Sahib in poetry (Four volumes). He has written Sakhis of 10 Gurus in verse. Another autobiography is needed to complete this ‘tale’ and we believe he would complete the epic ‘tale’.

Sutinder Singh Noor is a retired Professor, Department of Punjabi, University of Delhi. He is a Sahitya Akademi Award winner and a member of the Language Council of the H.R.D. Ministry, New Delhi.