A Pen and a Paint Brush 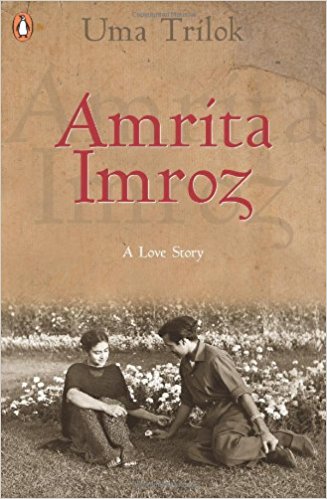 Evocative, esoteric and enchanting. Amrita Imroz—A Love Story is more than what the title suggests—is a love story with a difference. A slim volume, the book is reminiscent of Erich Segal’s one-time best-seller The Love Story both in terms of the name and size. But the similarity ends there.

Writer, rebel and a nonconformist to the core, Amrita Pritam has long been synonymous with Punjabi literature. Drawing inspiration from Sufi poets she churned out lustrous poetry and thought-provoking prose that soon earned her the title of Awaaz-e-Punjab. When Amrita and Imroz met, Amrita, who had started writing in her teens, was a young mother of two and he, a well-known painter. What ensued was the love-story of an author and a painter.

Uma Trilok, a close friend of both, delves into the nooks and corners of the lives of these subversive lovers, sharing with her readers lesser known aspects of the undefined relationship of Amrita and Imroz—a bond perhaps best described by Amrita Pritam herself:

When I wrapped myself with your being Our bodies turned inwards in contemplation Our limbs intertwined Like blossoms in a garland Like an offering at the altar of the spirit… Our names, slipping out of our lips, Became a sacred hymn…

The unusual love story starts here at a point when Amrita and Imroz have been living together for nearly forty years—their relationship a picture of serenity and fulfillment. While Amrita draws magical sustenance from Imroz, each stroke of Imroz’s brush says something about the love of his life. ‘He paints her, paints the windows of her house, illustrates her books, builds their bookcases, writes poetry on her lampshades and calligraphs her name in the form of a tree.’ Spiritually entwined and revelling in each other’s presence, the author can virtually hear a sacred hymn while in their company.

The relationship between Amrita and Imroz is one of total acceptance and reliance. In one of her books Amrita Pritam quotes an instance from their early years when she advised Imroz that he was too young to settle down and asked him to go and see the world before making a commitment to her. The young lover—several years her junior, promptly took three rounds of her room and said, ‘Okay, now I have seen the world’.

Their love is exceptional in more ways than one with the larger than life presence of a third individual, Amrita’s former lover, Sahir Ludhianvi. Amrita reveals that ‘there was one kind of love, like that of the sky, and there was another one, which was like a roof over one’s head’. Sahir was ‘like the sky’ for her. ‘A woman seeks both … and the roof eventually opens to the sky. It was chance and circumstance that she chose the roof. The sky was very distant. Love, for her, had immediacy and energy that stirred her, awakened her. Imroz adds matter-of-factly, ‘With Sahir her life was illusive but with me her life is real. He left her restless but with me she is fulfilled’. Right through their years together, both Amrita and Imroz vehemently denied the need for social endorsement for their relationship and were convinced that rather than them experiencing mortification of any kind, society should be ashamed for misjudging them. At times, Uma Trilok experiences ‘a forceful communication between Imroz’s silent but vibrant paintings, and the different characters carved by Amrita in her poems, stories and novels’.

The book abounds with images of Amrita and Imroz sitting together, serving each other, eating together, Amrita worrying over Imroz’s health and in turn Imroz nursing her—perhaps an attempt on the author’s part to show the lovers actually fulfilling a vow they had never taken—of being together through sickness and health. She writes in her room while he paints in his—the doors remain open, we are told. ‘There is the fragrance of each other’s presence but there is no interference.’ Writing in a language and style that is simple yet supple, Uma Trilok re-creates scenes of Amrita-Imroz’s lives (or was it one life, one wonders—as Imroz says the lane of love is narrow, two cannot pass through it, they have to become one). The real success of the book, however, lies in bringing alive Imroz, Amrita’s enigmatic lover. Enough has been written and spoken about Amrita Pritam but the man around whom her life revolved continued to be an obscure presence for many.

Not only does he come across as a gentle and caring lover, a father figure for Amrita’s children but also a man with a fierce sense of pride and self-respect. A generous sprinkling of his remarkable paintings right through the book provide the reader with ample opportunity to interrupt reading and deliberate over this enviable bonding between two creative individuals—a painter and a writer.

The two inspire each other in mysterious ways, tickling each other’s imagination while unconsciously enhancing their own creativity. Imroz narrates an incident from their early years together when Amrita put a question to him. ‘You paint women—beautiful women, with chiselled features; have you ever painted a woman with a mind?’ Amrita and Imroz’s love extends far beyond the usual parameters of a typical man-woman relationship. ‘She is my mother as well as my daughter,’ says Imroz shyly, revealing that Amrita on her part ‘does not like anybody else to come close to her and nurse her.’

Uma Trilok’s comparison of Amrita-Imroz with Heer-Ranjha and Sohni-Mahiwal may seem a trifle far-fetched and melodramatic but Amrita Pritam’s poignant poem for Imroz, written in her last days, is nothing if not heartrending. Main tenu pher milaangee … I will meet you again Where, how, when I know not I will meet you again As a spark of your imagination I will fall on your canvas I will gaze at you, in silence As a mysterious line on your canvas I will get dissolved as a beam of sunlight Into the colours of your canvas I will meet you again. … Unaware of the rest But aware I am, that Time will favour me. I know when body perishes, Everything perishes but picking those specks of existence That make the thread of memory, I will meet you again. Vandana R. Singh, presently a member of the Textbook Development Committee for Elective English, and Consultant Editor with NCERT, New Delhi, is the author of The Written Word (OUP). She has translated Alka Saraogi’s novel—Over to You Kadambari (Katha), and an anthology of Hindi contemporary women writers—To Each Her Own (NBT).