Agyeya and the Art of Biography 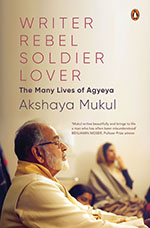 In 1936, the young and upcoming Hindi writer and poet, Sachidanand Hirananda Vatsyayan, ‘Agyeya’, wrote to Banarasi Das Chaturvedi, his mentor and friend at the time, ‘It is too early yet to tell secrets especially to you’ (p. 130). A few years later, in 1944, to another friend he wrote, ‘a person like me has a very small life outside but a big inner life’ (p. 267). Throughout his lifetime, and even after, those close to Agyeya variously described him as ‘reserved’, ‘quiet’, and ‘restrained’. And yet, it is riveting to learn how meticulously he held on to and left behind a lifetime of the most intimate of correspondences, his diaries and articles intact, receipts and photographs, letters from admirers, critics and colleagues, including ‘a lock of hair’, sent to him by one of his lovers, ‘still neatly tied together with a thread, seventy-four years later’. Perhaps he was thinking all along how this inner life could be revealed, not just through his own poems and novels, but also through another’s pen. Not just in his own time but thereafter. Perhaps they were meant to affirm that ‘ambitions do not die’, that a writer’s legacy is not simply quotation and counter quotation, but a means to resist and frustrate the stories that are told and retold, a process of shifting memory, a plea to confront its complexity. But precisely because the meaning of legacy in this sense becomes permissive and indulgent, not restrictive, it requires the biographer, the interpreter, the scholar, or the storyteller to be comprehensive and nuanced, prohibitively non-judgmental in appraisal, with a penchant for facts over hearsay, preferring objectivity over prejudice. Akshaya Mukul’s 750-odd page biography is all of the above, and more, making it not only one of the most important works on Agyeya till date, but setting a benchmark for biographers in India, rigorously disentangling the depths of his subject’s inner life, and the expanse of its outer.