All About the Endlessly Mysterious Matter of Language 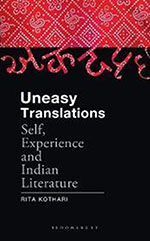 Reviewers typically position themselves as being more or less superior to the work under review. Thus, the work being reviewed is discovered to be—discreetly or otherwise—deficient, in the light of the work that the reviewers themselves would write if only they could tear themselves away from important work—like reviewing. (Though it might be more accurate to say that they might have written if they could…) I’m afraid Rita Kothari’s Uneasy Translations: Self, Experience and Indian Literature offers no such comfort. This is a difficult and challenging work—but it does throw one a generous invitation to become a better, perhaps even an adequate, reader.

I must confess at the outset that I don’t have much of a taste for ‘translation theory’. It usually seems to involve variations on a single, somewhat monotonous theme: the inadequacy of all translation, the irreplicability of ‘the original’. Although Uneasy Translations is formidably ‘theoretical’, and is involved centrally with doing, and reading, and teaching translations, it is not that kind of work at all. Rita Kothari is herself a versatile translator, and traffics between many languages—English and Hindi, of course, and also Gujarati and Sindhi. But what she has attempted here—the underlying project of the work, as it were, is something rather more adventurous than even her CV suggests. This is how she describes her project: ‘I have attempted to create an archive out of our surroundings, experiences that do not make it to translation theory; in multilingual lives within whose folds lie some of the most intricate lessons of gender and translation…’ I think of what she has done in the interconnected essays in this volume as a form of ‘destructive testing’.