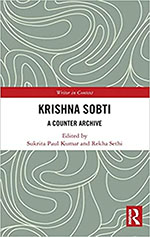 This book is part of the series ‘Writers in Context’ edited by Sukrita Paul Kumar and Chandana Dutta. The time for such a series has long come and I am glad that we finally have the first books in the series in our hands. To take up Indian language writers and put together an authoritative volume on their writings in English translation with excerpts from their works and their own essays and letters, interviews with them, biographical sketches and memoirs, bibliographical details, and critical readings of their works over the years answers to the needs of scholars of Indian literature all over the world. This could appeal to other readers as well since it gives easy access to the writings and you glimpse into ways of reading them. All this in English translation undertaken by many hands. I am certain, if there is a demand, this could be translated into other languages as well.

The fact that all this is in translation (with perhaps a few exceptions) is of utmost significance. Most Indian languages have their own literary and critical traditions. Most of us do not know these languages and thanks to translation into a language we know we may come across individual works by various writers. Even to read writers in a comparative perspective we need to know where they come from, where they position themselves in their traditions, how their works interact with other works in their languages and other languages, and how they are/were received in their languages.