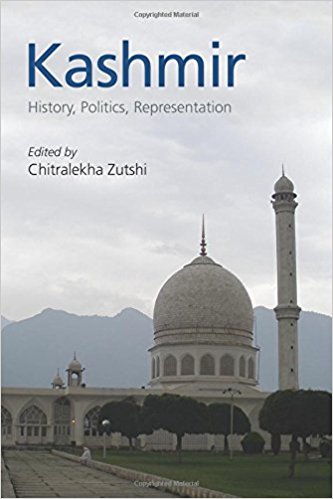 The Valley of Kashmir arouses a peculiar interest as a land of almost mythic and mysterious beauty and, since the end of colonialism in South Asia, as a space of violence. This imagination has taken further root since 1989 following the emergence of an insurgency and a movement for independence in Kashmir and from India and the drastic militarization of life by the Indian state. Regardless of one’s ideological location, Kashmir and Kashmiris have since then redefined notions of nation, state, belonging and ways of being in the world. Most important of all, since 1989 (or perhaps since the 1930s even) Kashmiris constantly force us to rethink a universal idea of freedom or azaadi. While there has been a great deal of writing on Kashmir across all genres over the past two decades, from academic texts to journalism (and increasingly fiction), there remains a question as to whether there is a conversation taking place between such texts. The book edited by the historian Chitralekha Zutshi is an attempt to bring different academic texts into a single volume that can facilitate such a conversation.

The book brings together contributions from history, anthropology, political science and area studies and is divided into three broad sections. The first, on history, includes contributions from the editor and other prominent scholars such as Mridu Rai, Andrew Whitehead and Shahla Hussein. Kashmir studies have been defined to a great extent by scholarship that engages with a sense of the past. Whether one reads Sanskrit or Persian chronicles or the writings of colonial observers, historians as purveyors of the past have played a critical role in shaping the agenda, especially when questions of origin emerge. Why is there a conflict in Kashmir? What happened in the past that has led to the forms of politics that dominate in the present? The contributors to the first section however go beyond approaches which have otherwise dominated much of the earlier scholarship in Kashmir with its emphasis on a cast of faceless, impersonal nation-states, big men and their conspiracies or as a salvage project. Rather, the contributors locate the roots of the present in spaces of everyday life in the past, as Zutshi depicts in her chapter on ‘Urban Public Culture’ and how the construction of knowledge and political ideologies in and about Kashmir were historically situated as Rai describes in the contestations over archaeology in Kashmir.

Whitehead and especially Hussein in their chapters take the reader to political ideas such as alternative national imaginations to see especially how the notion of azaadi has emerged over time. Most important of all, as scholars such as Zutshi and Rai have observed in the past, Kashmir has often been imagined as a land without people. These essays however place Kashmiris themselves centre stage in their own history and as agents and authors of that history. This also prevents a history of Kashmir from being strangled by the histories of the Indian and perhaps Pakistani nation-state, which otherwise remained a lacuna in earlier works, especially in texts that fall under the rubric of strategic studies.