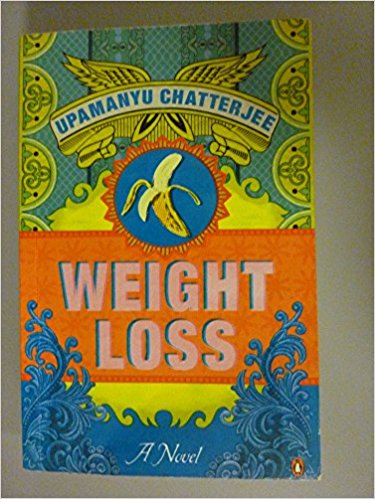 As our ever-growing population, and the increasing number of cases of molestations and rapes, and the shocking number of HIV positive people, and our record in trafficking and child prostitution, and our venerable Khushwant Singh testify, sex is always present in the mind and motivates many of the actions of the average Indian male of any age. Yet, sex is taboo in this land of the Kamasutra, the moral police is everywhere and is made up of the very men who will do anything for a piece of the ‘evil’ and ‘sick’ action, made so as a result of their public prudery and posturing. So millions and millions of Indians indulge in acts that they consider corrupt and degrading, living out snatches of sexual fantasies on the suspecting and unsuspecting. Upamanyu Chatterjee has always asked uncomfortable questions and here is the one he asks time and again – how do we live with ourselves in this country?

Weight Loss is about obsession and the main character, whose obsessions it maps, is called Bhola, the innocent. Bhola is ruled by his sexual urge, for men as well as women (and if circumstances had permitted he might have tried other outlets as well, like the cattle he is told village boys lose their virginity to), and constructs his entire life around his obsession for Titli, a vegetable vendor, her husband Moti, and assorted other characters like his landlady, Mrs. Manchanda. Pursuing Titli and her husband (he actually succeeds with the husband first) almost all his life, which he ends by slitting his wrists at the age of 37, Bhola follows the path of “sexual and spiritual degradation” that the subtitle of the novel promises.

The novel begins with school where Bhola’s obsession with his Physical Education teacher, Anthony, is the stuff of sado-masochist fantasy. While others have graduated to obsessing with their women teachers, Bhola and his friend, Dosto (named after the unspellable Russian author but obviously a short cut to name a friend of the protagonist—‘Dosto to aisa’), lust for men mainly, with Dosto in love with his driver and Bhola doing everything to get punished by Anthony, to touch him as roughly as the teacher deals with him. Soon, Bhola graduates to lusting after women teachers as well. But he is equally attracted and repelled by many others. Almost all his memorable encounters are sexual—with his cook, or the eunuchs or with a flashing sadhu. The school section will encourage many into thinking that this is a vastly funny book that will show the growth and maturity of the protagonist, how he overcomes his Jesuit schooling and Hindu upbringing. However, neither the novel nor the protagonist goes anywhere else. This is a dark novel, funny in spite of being so dark, and extremely believable in spite of its seemingly unreal world where all decisions taken by the protagonist are because of his sexual urges (except the one to have a baby!). But then this is a novel about a society where almost everybody has sex on the mind all the time, where morality or codes of acceptable behaviour are only about maintaining facades, where nobody’s life is fulfilling in any way.

This is a novel about India. A nation obsessed with purification and rituals is also a nation that needs them desperately to keep its truths at bay. Not only is repression a sign of our contemporary times, we have always had a fundamental schism in our attitude to sex and sexuality. This ambiguity or difference in our ancient philosophical approaches to sexuality is that sex is to be celebrated and is a path to liberation, while it is at the same time to be controlled and sublimated because it ties us down to the material world. Bhola’s other obsessions, with weight loss and living the day according to disciplinary rules that he has set up including his daily jogging, mirror this dichotomy. His need to discipline the body is the other side of the coin from his need to indulge his bodily appetites. This ambiguous balance is reflected in the number of people he has slept with in about sixteen years of sexual activity – eight, four men and four women. Bhola wants life on his own terms; he wants sex without the muddying effects of love or emotional commitment, he wants to maintain order and control; he wants to be the dominant partner in his relationships, to take or leave as he pleases. Hence, all his movements in the novel, including his choice of an obscure college in the hills, is in pursuit of the couple he desires – they try to evade him, and he cannot let them disappear, the choice should have been his not theirs. While they acquiesce to him in his sexual desires and directions, both being scrupulously correct in dealing with him as a client, they also lead lives of their own, only tangentially connected to him.

In fact, this is a novel about dissociation, about dysfunctional families and societies. Bhola’s own family is never really there – and when the father actually understands, Bhola has no time for him. Dosto marries Anin, Bhola’s one-time neighbour who had looked him over voyeuristically during his nude day dreams; a girl who had attacked her own sister with murderous intent. Bhola’s wife, Anin’s sister, still finds solace at the breast of her ayah. Their father is a typical police wallah, always ready to bend rules and bend over maids. From cooks to drivers, to the quack doctor Borkar, all are willing to play the game of sex and manipulation.

As I said before, you believe in Bhola and you believe him when he says towards the end of his life that he “felt like a boy, an adolescent not waiting for the adventures of life but one whom they—and life itself—had quietly bypassed.” (p.373) But the joke here is that he is comparing himself to “a white resident of Milwaukee, USA, who had been a murderer, a molester of male children, a necrophile and a cannibal” and all of it by thirty-one! Bhola has achieved nothing in comparison. But Bhola has been true to himself, even if he has not been completely truthful to others, including his wife. He has indulged in every sexual fantasy that he may have had and has disciplined his body as much as he could. However, as a student or as a lecturer in the same college in the hills, Bhola manages for the most part to maintain the façade of decorum, even managing to arrange his marriage.

It is the birth of his desired child and a near death experience that change Bhola into a sentimental mode. Ironically, his life changes back again because he is wrongly suspected of having molested his own child, a child who seemed to presage a second life for him, a life of emotional bonding and sharing that he had been incapable of till then. This reversal is also ironic because keen to celebrate life after his lucky escape he is finally left with no alternative but to take his own life – the ultimate act in his weight loss programme – giving up the body itself.

Weight Loss is a brilliantly written book, though many may not want to read it. Those who last the distance with this book are guaranteed to lose some weight.