A Warrior Against War In The Wild 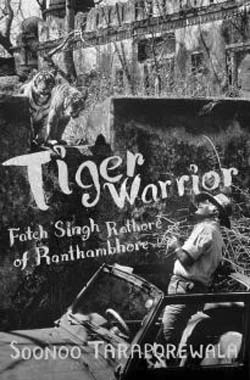 When I began reading Soonoo Tara- porewala’s biography of Fateh Singh Rathore, I thought I would right away begin encountering thrilling tiger tales. I was disappointed. I trudged on, nevertheless, wondering when I would sight the tiger. Of course, I was a little impatient, and so to blame. For the book is Rathore’s biography, not only a fascinating and riveting account of the tiger in the wild and the tiger warrior’s jungle trail. But then the third chapter on, the tiger began making its appearance. And the initial disappointment evaporated. Now the tiger was more and more in the foreground and lived on centre stage till the close of the book.

This biography by Taraporewala sometimes sees a repetition of details or a back and forth of events in the chronology. Also, there are those occasions when an issue or event in Rathore’s life has been touched upon with detailing to be desired for, and others when the minutiae of an event have been spelt out. This is perhaps bound to happen as such a narrative is dependent on facts available from various sources. Here the author has based her book on Rathore’s reminiscences recorded on nine audio cassettes, media articles and reports collected by Rathore and other documents such as legal documents of the cases he was involved in. Also, the book has given predominance to Rathore’s life as the Tiger Warrior. And so all told Taraporewala has done justice to the Tiger Warrior and the tiger. Taraporewala, who first visited Ranthambhore in the early 1980s, ‘half a lifetime ago’, says she and her family ‘had fallen in love with it at first sight, with its ravishing beauty and abundant wildlife.’ And she goes on to say:’Ranthambhore means everything to me, and it hurts and saddens me to see it despoiled by greed, carelessness and ineptitude.’ Taraporewala, who worked as a librarian for more than twenty years at the British Council in Mumbai, ‘has a special love for the forests and animals of Ranthambhore.’

Now for the book’s contents. ‘Childhood and Family’ starts off from Fateh’s birth and childhood and goes on to describe his antecedents and then on to his children and their families right up to his grandchildren! It begins with the two dates attributed to his birth, one in 1936 and the other in 1938, the official one! Then the book goes back to Rathore’s education and his early employment that did not meet with success, so that the reader reaches Chapter 3 when Rathore finds his calling. In the wild.

Taraporewala takes the reader on a fascinating journey through the 1970s and 1980s and on till the mid-1990s when Fateh Singh Rathore worked in the forest department in different capacities, in an unwavering role though, of protecting the national park or sanctuary he was posted at, in the main the Ranthambhore National Park and Tiger Reserve and its wildlife—the flagship tiger and the so many other life forms that inhabit the habitat. So it is really a safari, so to say, that Taraporewala lets us go on with Fateh Singh Rathore. In fact Valmik Thapar remarks in his foreword to the book: ‘Ranthambhore was as much his kingdom as the tiger’s.’ And Tara-porewala notes with regard to Rathore: ‘… he himself was as like a tiger as it is possible for any human to be.’ Now that is something to be exclaimed at!

While the longest period of his career was spent by Rathore in Ranthambhore there were the intervening periods spent in other locations—in the wildlife sanctuary/national park at Sariska, Mount Abu and Bharatpur. Rathore also had a fruitful in-service training at Dehradun’s Forest Research Institute that gave him sufficient scope to enhance his field work and travel to many a national park around the country, from Dudhwa in present day Uttarakhand to Betla in present day Jharkhand, and from Kaziranga in Assam to Gir in Gujarat.

What is significant in the biography both to a lay reader or nature lover and the policy maker and staunch tiger protection activist and supporter is how Rathore went about literally creating Ranthambhore and giving it a unique status of a wildlife and, more specially, tiger habitat. It is of import to track this process from the making of roads and access paths or their closure as need demanded, creating water holes and pure water streams and the creation of an undisturbed wilderness that a wildlife habitat must be by having villages located in the Park shift out to areas well created with all facilities or at least most facilities—land, tractors and wells, education and health care—available to the inhabitants. The shifting out of villages from the Park was a commendable job that the Warrior undertook. And while this exercise was held up as an example to be replicated in other Parks, it never could be done! Earlier on the Park under Rathore became one of the first nine tiger reserves to be included in Project Tiger and thus receive the benefits of conservation and protection.

What is also interesting is the tiger behaviour that Rathore came to keenly observe and document thanks to the daily and regular observation that his job in the Park allowed. This he often engaged in with tiger activist Valmik Thapar. In fact, their coming together in this exercise was so fruitful that it led to the birth of many a wonderful book on tiger behaviour supported and enriched by photographs taken by Rathore and Thapar and his brother-in-law Tejbir Singh. While 1983 saw the release of their maiden book, With Tigers in the Wild, their subsequent works, Tiger: Portrait of a Predator and Tigers: The Secret Life were released in 1986 and 1989 respectively, all very well received.

Fascinating aspects of tiger behaviour such as the familial bonds of tigers—the male, female and the cubs—came to be observed by Rathore and Thapar.

It is in this sense that Taraporewala’s book may be read as a safari in words, with the concomitant thrill, fascination and wonder. It is the unfolding of the wilderness and the wildlife that inhabits it that were rewarding for the Tiger Warrior in his career and here for the reader of the narrative. The longest chapter, running into more than 40 pages, is on the ‘business’ of poaching, one that Rathore fought against relentlessly.

There were, of course, the high points in Rathore’s career as for instance escorting the then Prime Minister, Rajiv Gandhi, and his family and friends, on his New Year holiday at the Park in 1986, when he was given the sobriquet Fateh Singh ‘Ranthambhore’, by Mr Gandhi himself. Besides, Rathore received in no small measure accolades for his work by way of environment awards and praise for the books he co-authored. But then there was also the downside.

The author describes how Rathore’s career suffered thanks to the jealousy of colleagues, bureaucrats, politicians, and disgruntled villagers and local graziers and ended with his last three working years, prior to retirement, spent on leave at home. This was the ultimate after he suffered a major setback in 1981 at the hands of the graziers whom he had succeeded in keeping away from the Ranthambhore National Park, an incident that left him with injuries and fractures and hospitalization for a couple of months. And yet again in 1987-88 when he decided to put in his papers after the Ranthambhore National Park became available to graziers by a decision of the district administration, and the Park and its wildlife lost much of the benefits that had been gained by the stopping of cattle grazing.

The book shows, through the career of Rathore, the trend of the honest and upright not getting their due and acceding defeat to the powerful powers that be. In fact Rathore’s passion for the protection of Ranthambhore was so well known world over that even after his retirement, when he was the honorary wildlife warden of the park, he accompanied the then US president Bill Clinton on his visit to the Park in the year 2000. And of course Rathore was committed to the protection of the Park right till the end of his life in 2011.

The biography also takes the reader through Rathore’s chequered personal life—the ups and downs in his marriage and family life and the highs and lows in his romance and dalliances. There are also more than a dozen photographs in the book—some stunning tiger pictures, and some of the Rathore family.

This book is one you must read. And it will tempt you, if you are a wildlife enthusiast, the bibliophile type, to go ahead and read the titles authored by the Tiger Warrior himself.