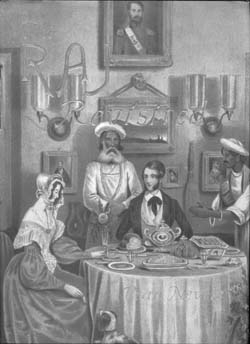 Fascination with ‘Otherness’ manifests it- self in many ways; whether it is the intrepid 16th century European explorers embarking on dangerous journeys time and again to find strange new lands, or writers travelling across cruel landscapes to meet new people and create new genres or painters reaching out to exotic settings and subjects for their art.

The collection of paintings in Pran Neville’s The Raj Revisited is testimony to this fascination with the unfamiliar and the new. The book showcases 131 paintings, by various painters whose works date between 1772 and 1920, although what the criteria for selection or exclusion of particular painters and their works might have been, is not entirely clear. These include a few Indian painters and portrait makers as well although these were works that had been commissioned by the British patrons in most cases.

The introduction sets the tone for the rest of the book. Deftly crafted to cover over a century of paintings, along with information and discussion of the Europeans’ impressions of India and its manifestations in a mere eight pages must have taken a lot of thought on the part of the author; just the process of selecting what would be important enough to merit inclusion and what would have to be excluded is in itself a daunting task. Besides, the introduction alerts the readers that the paintings are only one aspect of the recorded responses to the wonder that must have been India, with references to the manuscripts, journal and diary entries and memoirs as rewarding sources of information for historians studying the period.

Apart from the introduction and an endnote with a brief biographical sketch of some of the painters whose works have been used in the compilation, the book is divided into eight theme-based sections, each dealing with a specific aspect of India. Considering that there might have been numerous themes that the paintings could have been categorized under, the book has broad but attractive themes which are like windows into the worlds of the sahibs, their mem-sahibs and the bibis.

The first of these sections, entitled ‘First Views of India’, is fascinating since it contains paintings that successfully capture the sense of awe and bewilderment of the visitors to the ‘exotic Indies’. The accompanying text is informative and detailed. It has to be pointed out here though, that the ‘first impressions’ were not necessarily the first European impressions, but the first impressions or views for the visitors, whether it was in 1860 or in 1780. It might also be relevant here to point out that the first literary response to (early) modern Britain’s encounter with India dates back to the notes of the adventurer-trader Ralph Fitch who recorded his impressions of many parts of Asia, including India, in the 1580s—almost two centuries before the first of the paintings featured in the book. This section has some of the most moving and impressive paintings, most of which seem to focus on the architectural splendour and dramatic landscapes that the painters encountered, against the spectacular backdrop of the Indian sunsets and the brilliant seasonal variations in light and shade.

The second section, ‘The Sahib’s Lifestyle’ has detailed narrative to accompany the paintings describing the setting which inspired the paintings chosen for the section. The author’s clear distaste for the opulent and degenerate lifestyles of the sahib and his lady’s expensive daily schedule is obvious from his own comments and choice of excerpts from memoirs and diary entries. For instance, in describing the daily schedule of a particular sahib, he quotes from ‘A Day in the Life of an English Sahib’, from Macintosh Travels (1771-82): ‘The head bearer and the jemmadar enter the hall and his bedroom at eight o’clock. A lady quits his side and is conducted by a private staircase either to her own apartment or out of the yard.’ The sahib’s busy day, with all his chores including supper at eight o’clock followed by the entertaining of guests keep him up till midnight or even one in the morning, after which ‘our hero’ is conducted to his bedroom where he finds a ‘female companion waiting to amuse him’. Neville then goes on to present the ‘equally leisure-oriented’ life of the memsahib, who, ‘during their stay in India learnt the art of never moving from their perch if they could avoid it.’ The paintings in this section vividly represent the plush upholstery, expensive accessories, the graceful hairstyles and flouncy costumes of the rulers and their women, with the ubiquitous Indian adding to the flavour and authenticity of the scene.

‘Shikar and Animal Fights’ is the next theme and the narrative is as gripping as the paintings. The illustrations for this theme are representative of a wide range of media from vivid watercolours to oil on canvas and aquatint engravings. Most of the paintings are on the more hair-raising moments during shikar, but the three paintings/engravings on animal fight are equally dramatic, with a black and white engraving on the title page of the section showing an elephant fight at Baroda by L. Rousselet, 1875. There is another illustration of an elephant fight being witnessed by Lord Wellesley during breakfast in Oudh by Sir Charles Doyly dated 1813. Despite the almost revolting goriness of the theme, this is a personal favourite for the extremely delicate colours that capture every detail of the backdrop of a cloudy Oudh skyline in the morning and the languid expressions of the viewers.

The two sections on ‘Festivals and Amusements’ and ‘Dance and Music’ are the most varied in subject and approach as well as the medium used. From vibrant water-colours to muted hues on hand coloured lithographs and aquatints, the artists’ varied emotions from the sense of amazement, admiration, amusement and perhaps even disbelief at beholding the festivities and antics of the ‘natives’ are captured in these pages. This section also has a few paintings by Indian artists, though there is not much difference in style between their work and those of their British counterparts. As is to be expected, the section on dance is primarily preoccupied with ‘Nautch Girls’, although scenes of sahibs witnessing nautch at their Indian host’s home conveys a lot more than the elegance of the dancers, including the attitudes of the guests, hosts and the army of servants.

‘Castes and Occupations’ contains a remarkable range of subjects and speaks volumes about some of the Raj painters’ genuine endeavours to understand and document Indian society through the lens of caste and occupational divisions. The narrative is interesting and substantiated with excerpts from as diverse sources as the writings of the renowned Indologist H.H. Wilson to the French missionary J.A. Dubois. Painting as a purely academic pursuit is evident from the hand coloured etchings of F.B. Solvyns which reflect the artist’s keen interest and perception. In this section too, there are paintings by Indian artists as well. It is interesting to note that the moods and expressions captured in these works are reflective of both the Indian and the British artists’ empathy for and identification with their subjects. Paintings by Fanny Parks, Sir Charles Doyly, Marianne Postans and unnamed Indian artists from Tanjore to Delhi and Calcutta are good examples of such work. The last two sections are on ‘Portrayal of Indian Women’ and ‘Modes of Travel’ respectively. The British interest in the Palkee and elephant back as modes of transport is well documented, as is their interest in the dusky beauty of Indian women. The perception of Indian women as ‘Exotica’ and the appeal that traditional Indian modes of transport held for the westerner is evident in the mood, posture and subjects chosen by the artists. The narratives accompanying the art works are both informative and spiced up with interesting tid-bits.

The book ends with a biographical note on only ten of the artists whose paintings are featured. Access to more information on all of the artists would have helped the reader appreciate the paintings better but the author must have had his reasons for his shortlist. One interesting feature of the book is the omission of any of the political events that must have left their impact on the British perception of India. Perhaps the tendency to avoid unpleasant memories prevented many artists from leaving their impressions on canvas. Either way, this omission left me with a sense of something left incomplete. That aside, the book reminded me of the delightful childhood experience of peering through different magic windows at the local fairs, where each window gave a glimpse of India’s wildlife, architecture, landscape and people—the first pieces of the jigsaw that was to make up the picture of India for many of us from the pre-TV era. The Raj Revisited was a similar experience for glimpses of the Raj—pieces in a jigsaw that contribute to our understanding of colonial India.