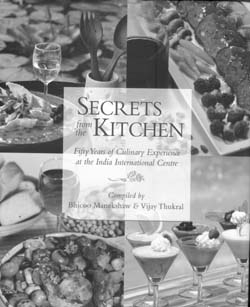 If I lived in India, Delhi would be my city of choice. During frequent bouts of daydreaming, I often fantasize about how I would spend my days there. Of course, as required of any half-decent fantasy, I ignore the heat and the dust, and instead focus on the bright side. I picture myself picnicking—on balmy winter afternoons—in Lodhi Gardens, shopping in Dilli Haat, and eating in Gali Paranthe Wali. I imagine visits to theaters, galleries, libraries, museums, and coffeehouses. These days I also pretend to be a lifetime member of the India International Center (IIC). Not an easy feat, in case you were wondering. The inspiration behind this addition to my fictional life’s résumé is no doubt Secrets from the Kitchen—the Golden Jubilee cookbook that brings out fifty years of recipes and stories from one of Delhi’s favourite institutions.

The IIC is situated in Lodhi Estate, an area also known as ‘Steinabad’ in memory of the American architect, Joseph Allen Stein, who designed not just the IIC building, but numerous other landmarks in its vicinity, such as the Indian Habitat Center. It was founded as a ‘meeting place of minds’ to facilitate intellectual, social, and cultural exchange between ‘peoples and nations’. Since its inauguration by Pandit Jawaharlal Nehru in 1962, the IIC has been host to an increasing number of international and national events. Food has been an integral part of this journey. Members and guests fondly recount the meals they have enjoyed over the years in IIC’s elegant dining spaces overlooking the lush Lodhi Gardens. As the sphere of its activities has gradually expanded, so has the culinary repertoire of its chefs. It is this evolution that the book delightfully narrates by taking us on a ride through IIC’s culinary and institutional history.

The book comprises two hundred recipes shortlisted by Bhicoo Manekshaw, a Cordon Bleu trained chef who was the Catering Consultant at the IIC for several years, and Vijay Thukral, who has been IIC’s Executive Chef since 1988.The regular menu during the early years (1962-73) featured popular continental and ‘colonial’ dishes such as Roast Leg of Lamb with Mint Sauce, Chicken à la Kiev, and Mulligatawny Soup. A lot changed after Bhicoo Manekshaw joined the IIC in 1974. She introduced plat du jour in addition to the a la carte menu; barbeques and the South Indian and Chinese kitchens were opened; and regional Indian cuisines were more prominently featured on the menus.

In a charming touch, the book reproduces several old menus that were served on certain dates and special occasions. There is an All Time Favourites section—dishes that ‘just can’t be removed from the menu’—with recipes ranging from Chilled Melon and Cucumber Soup to Khatta Meetha Kaddu. My favourite, in terms of reading if not taste-wise, is the set of dishes that commemorate people who played an important role in making IIC what it is—people like John Lall (Salambos John Lall) who was the Director from 1973 to 1979, the architect Joseph Stein (Stein’s Potato and Sesame Soup), and the founding Director, Dr. C. D. Deshmukh (Gateâu Deshmukh).

Delhi, being the capital, is also a diplomatic hub, and thus, a fertile ground for international culinary collaborations. The IIC kitchen is perhaps the most prominent example of such exchange between ‘peoples and nations’. Since the 1980s, the IIC chefs have worked with experts from various embassies to prepare dinners that have followed international cultural events. The book includes some of these recipes, such as the Vichyssoise, Tomatoes Provencal, and Gateâu Citron from the dinner organized by the IIC when the Festival of France was celebrated in India in May 1989. The food traditions and cultures of smaller communities often get overlooked in restaurant menus as well as in the popular imagination of food. As an expatriate, I am all too familiar with the equation of Indian food with Chicken Tikka Masala and Palak Paneer. The regional food festivals organized by various state houses, five-star hotels, and venues like the Dilli Haat, are an essential platform to showcase India’s culinary diversity, and, a big reason why Delhi is considered the food capital of the country. The menus at IIC have also included recipes from the Kodavas (Baimale Kari), the Parsis (Sali ma Gosht), and several North East Indian communities (Smoked Pork with Bamboo Shoots) that find a prominent place in the book.

As one can imagine, it is not easy to provide every little detail when the scope of a cookbook is as wide as this one. The authors do a remarkable job at making the book easy to cook from by including photographs of finished dishes, a concise Table of Measures, an English-Hindi Glossary, and a section of basic recipes (stocks, sauces, dressings) and techniques. The historical trivia enthusiasts will certainly enjoy reading about the likes and dislikes of some of the better-known IIC diners.

Some say, ‘People want to become members of the IIC only for the food that is served here.’ The stories, photographs, and recipes in this lovely cookbook certainly make this assertion seem true. For those of us not lucky enough to be members, now there is a second-best option.

TO PREPARE: The marination: Combine the marinade ingredients in a bowl and set aside. Wash the leg and pat dry. Prick the leg all over with a fork and rub in the marinade. Set aside to marinate in the refrigerator for 4 hours.

To cook the raan: Remove the leg from the refrigerator; bring to room temperature. Place the leg in a baking tray and pour the vinegar and rum over the leg. Add 2 cups of water to the tray. Bake in an oven preheated to 180° C for 1.5 hours, turning and basting the leg periodically, till the liquid in the tray evaporates and the meat is tender. When a skewer is inserted into the thickest part of the leg, the juices should run clear. Remove the tray from the oven and baste the leg with oil. Place the leg under a moderately hot frill. Turn the leg periodically, till well browned on all sides.

TO SERVE: Transfer the leg to a serving platter. Garnish with onion rings and sliced tomatoes. Sprinkle chaat masala powder and serve hot.